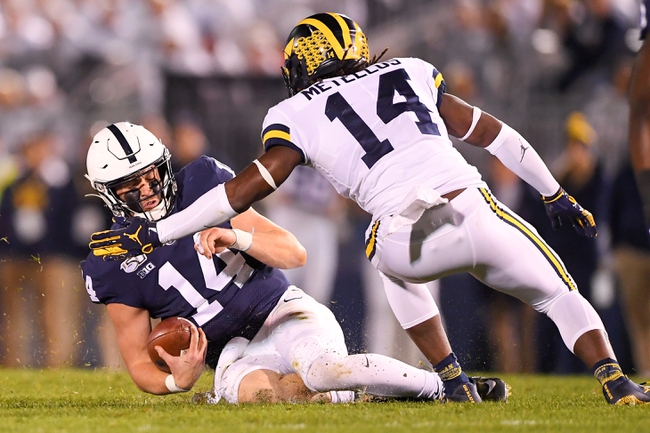 The Line: Michigan Wolverines -3.5 Click to Get Latest Betting Odds

Penn State managed a nice run in 2019, finishing 11-2 overall and 7-2 in the Big Ten. The Nittany Lions earned a spot in the Cotton Bowl Classic, where they beat Memphis 53-39. As for Michigan, they didn’t perform quite as well at 9-4 overall and 6-3 in the Big Ten. In the Citrus Bowl Michigan finished the season on a down note with a 35-16 loss to Alabama. Check back all season long for free college football picks and college football predictions at Sports Chat Place.

Let’s take a closer look at both teams and see if we can get an idea of how things might play out when the Nittany Lions meet the Wolverines on October 3.

Penn State was projected to finish fourth in the East Division last year, but after a strong campaign they were behind only Ohio State who went 9-0 in the conference. The Nittany Lions started out the season at 8-0 before losing a close 31-26 affair versus Minnesota, then fell to Ohio State 28-17 a couple of games later as the team’s only blemishes on the season. Moving on to 2020, Penn State head coach James Franklin enters his seventh season at the helm, and gets a new offensive coordinator in Kirk Ciarrocca. The Nittany Lions will get eight starters on offense back as well as five on defense, so despite the coaching changes don’t expect the formula to disappear. Look for high-impact returning players like Micah Parsons, Pat Freiermuth and Sean Clifford to make huge contributions as well. Should be another strong year.

Over on the Michigan side, they’re reeling a bit after a disappointing season. The Wolverines were expected to win the East Division in 2019, but finished a relatively distant third behind Ohio State and Penn State. A 35-14 loss to Wisconsin in Game 3 was something of a shock, then the 28-21 loss to the Nittany Lions basically torpedoed the Wolverines’ chances at taking the division. A 35-16 bowl loss to Alabama was perhaps a fitting topper on a shaky campaign. In any case, Michigan head coach Jim Harbaugh is back for his sixth season in 2020, and with OC Josh Gattis entering his second year hopefully that side of the ball will be more consistent. The Wolverines get some key talent back on defense and should have a strong unit there, but on the other side there are some decisions to make on the O-line (just one of five starters remains from last year) and at QB—Dylan McCaffrey and Joe Milton are a couple of viable options there.

Pick: I like Penn State in this huge division matchup. It’s pretty tricky as an early-look pick, but considering the Nittany Lions will return an experienced team they should be able to kick off the season at a better clip than most. I expect another close game like last season, and though it’ll be difficult playing at Michigan, Penn State’s experienced roster should be able to weather the storm well enough to stay close—and maybe even win.

As for Michigan, they’re likely going to need a few games to work the proverbial kinks out, but should be moving along pretty smoothly by the time this game rolls around. It should be another great season in the Big Ten, so I’m really looking forward to this matchup.