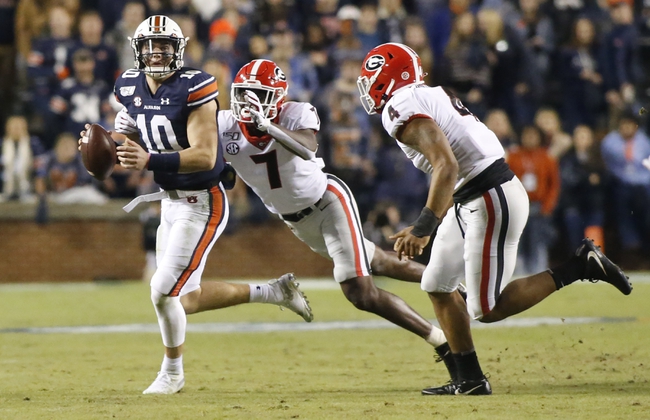 Auburn had a pretty solid but ultimately disappointing football season in 2019, going 9-4 overall and 5-3 in the SEC. The Tigers earned an invite to the Outback Bowl, where they fell in a tough one 31-24 to Minnesota. As for Georgia, their campaign was pretty darn great at 12-2 overall and 7-1 in the SEC. The Bulldogs fell to LSU 37-10 in the SEC Championship Game but bounced back with a Sugar Bowl win over Baylor 26-14. Check back all season long for free college football picks and college football predictions at Sports Chat Place.

Let’s take a closer look at both teams and see if we can get an idea of how things might play out when the Tigers meet the Bulldogs on October 10.

Auburn had the misfortune of playing in one of the best divisions in all of college football last season, finishing third behind the mighty LSU and a very good Alabama team. The Tigers notched a few nice ranked wins during the season versus Alabama, Oregon and Texas A&M but fell in close games 23-20 to LSU and 21-14 to Georgia. The 31-24 Outback Bowl loss to Minnesota is a tough pill to swallow as well; Auburn probably should have won that game, and probably should have had a better season overall with all that talent on the roster. Moving on to 2020, Auburn head coach Gus Malzahn enters his eighth season, and he gets some new OC help in Chad Morris. That crew will be tasked with helping QB Bo Nix take the next step in his development and grow into some more consistency in those big games. The major unknown for the Tigers this year is on offensive line however, as all five main starters are gone from last season’s group.

Over on the Georgia side, they had a pretty excellent season last year, and had only one regular season loss in a 2OT 20-17 upset at the hands of South Carolina. Outside of that, the Bulldogs dispatched all comers and grabbed victories over great teams like Auburn, Florida and Notre Dame. Georgia didn’t have much chance in the SEC Championship game due to LSU’s charmed season, but the 26-14 Sugar Bowl win over Baylor was some nice icing on the proverbial cake. In any case, 2020 should be another strong year for the Bulldogs with head coach Kirby Smart entering his fifth year. OC Todd Monken takes over in a revamp of that unit, and once he gets QB Jamie Newman up to speed we should see great things from Georgia on the scoreboard. There’s lots of talent across this roster and the stage is set for another division win for the Bulldogs.

Pick: I like Georgia, but it’s reasonably close. Auburn will be touching up their offense a bit this season, but by the time this game rolls around they should be doing pretty well. The major thing that worries me is the turnover on that offensive line; due to the crazy offseason it’ll likely take longer for that unit to develop sufficient chemistry to go up against the top-shelf teams in the country. Still, Auburn will be competitive; they always are.

As for Georgia, they’ve got some overhauling to do on their offense as well and may be shaky coming out of the gate, but given the sheer amount of talent and depth on that roster—and Monken’s track record of fielding great offenses—the growing pains should be minimal. If all goes well, Georgia will be in a good position to take not only the division but the entire conference.