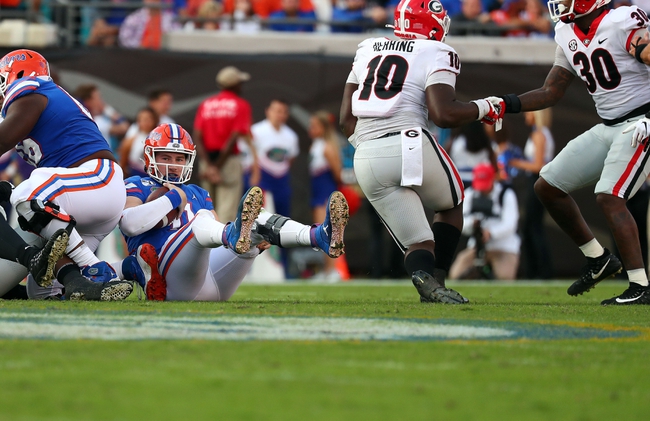 The Line: Florida Gators +2.5 Click Here for the Latest Odds

Georgia is coming off a really nice season in 2019, going 12-2 overall and 7-1 in the SEC. The Bulldogs lost the SEC Championship Game to LSU 37-10, but bounced back for a nice 26-14 win over Baylor in the Sugar Bowl. As for Florida, they did well last season also with an 11-2 overall mark and a 6-2 record in the SEC. The Gators earned an invite to the Orange Bowl, where they took out Virginia 36-28. Check back all season long for free college football picks and college football predictions at Sports Chat Place.

Let’s take a closer look at both teams and see if we can get an idea of how things might play out when the Bulldogs meet the Gators on Halloween.

Georgia really didn’t have too many blemishes on their 2019 campaign. The Bulldogs edged out Florida in the East Division by a single game and won the head-to-head battle 24-17. One misstep was a 2OT home loss to South Carolina, but Georgia would go on to win their next half-dozen games on the way to the SEC title matchup. Considering how good LSU was last year, there’s really not much for the Bulldogs to complain about. In any case, 2020 brings on the fifth year of Georgia head coach Kirby Smart and the first for new OC Tod Monken. The Bulldogs offense should be quite formidable with returning names like Zamir White and George Pickens, but they’ve got to replace four big contributors on the line. Defensively Georgia has some holes to fill as well, but they’re a pretty deep and well-balanced squad with good leadership in guys like Malik Herring and Travon Walker.

Over on the Florida side, they’re likely chomping at the bit for this rematch, considering the head-to-head loss versus the Bulldogs kept the Gators out of that top spot in the East. The only other game that Florida lost last season was against LSU, and everybody lost to LSU last season. There were a couple of relative close calls, but all things considered no one is going to complain much about 11 wins. Moving on to 2020, third-year Florida head coach Dan Mullen will have some nice weapons to work with, starting with new QB standout Kyle Trask—he’s the top returning passer in the SEC. The Gators have a nice offensive line this year with three returning starters, and look for names like Dameon Pierce and Lorenzo Lingard to emerge in the running game. Florida will do a lot of things very well this season.

Pick: I like the Gators. Despite Florida having to replace a few top tacklers on defense and fill some roster holes elsewhere, they’re still in a comparatively good position in relation to some other SEC teams. An established system and experienced players will go a long way toward finding normalcy quickly after this weird offseason, and the Gators certainly have all the pieces there.

Georgia is set up for a nice year as well, and by all indications should be battling it out with the Gators for division supremacy once again. As an early-look pick however, Florida just looks better to me on paper. We’ll see; should be a really fun, must-watch game.