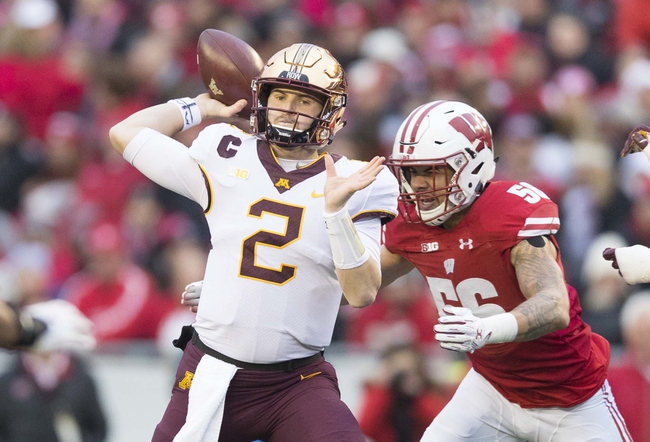 The Line: Wisconsin Badgers -9.5 Click Here for the Latest Odds

Minnesota posted a strong football campaign in 2019, going 11-2 overall and 7-2 in the Big Ten. The Gophers earned a trip to the Outback Bowl, where they took out Auburn 31-24. As for Wisconsin, they edged out Minnesota in the West Division, going 10-4 overall and 7-2 in the Big Ten. The Badgers’ season ended on a couple of down notes however, as they fell to Ohio State 34-21 in the Big Ten Championship Game and to Oregon 28-27 in the Rose Bowl. Check back all season long for free college football picks and college football predictions at Sports Chat Place.

Let’s take a closer look at both teams and see if we can get an idea of how things might play out when the Gophers meet the Badgers on October 10.

Minnesota’s 2019 run was its most successful in over 50 years, and the Gophers were quite the formidable team. That squad opened up with a nine-game win streak which included a 31-26 win over Penn State, who was ranked No. 4 at that time. Minnesota had a couple of missteps late however, falling to Iowa 23-19 and Wisconsin 38-17, the latter game deciding the West Division. This will certainly be a great rematch. In any case, moving on to the 2020 season, Minnesota head coach PJ Fleck enters his fourth year, and gets a bit of a makeover in his support staff with three new names. That crew will try to recapture the magic on offense with nine starters set to return following a Big Ten ranking of No. 4 in total offense last year. Tanner Morgan is back as well, and though Tyler Johnson has departed to the NFL he’s still got reliable receiving names like Rashod Bateman and Jake Paulson at his disposal.

Over on the Wisconsin side, they’re likely content with a pretty solid overall season in 2019, but a couple of mistakes along the way stymied what could have been an epic campaign. One was a 24-23 road loss to Illinois, which came ahead of what was likely an inevitable loss to Ohio State. The Badgers bounced back with wins in their next four games, but then another loss to the Buckeyes in the championship game preceded the flat bowl game defeat. It was a good season, but could have been much better. On to 2020, and with Paul Chryst back as head coach for his sixth season. It’ll be challenging for the team to replace some of the key names who have departed, but the team does boast a couple of really solid QBs in Jack Coan and Graham Mertz. RB Jonathan Taylor and his 2,255 total yards are gone, but young ball-carriers like Garrett Groshek and Nakia Watson should be able to pick up most of the slack.

Pick: I like Minnesota. While Wisconsin does have a great roster and some great young talent, the Badgers may have a few growing pains in these early games after the weird offseason and I don’t think they’ll be quite as dominant this year. The Gophers return a really solid core group to their roster, and though they’ll have some adjustments to make in the coaching staff and scheme everything should go relatively smoothly. As an early-look pick, I think Minnesota can certainly get in there. Should be a fun and competitive matchup.