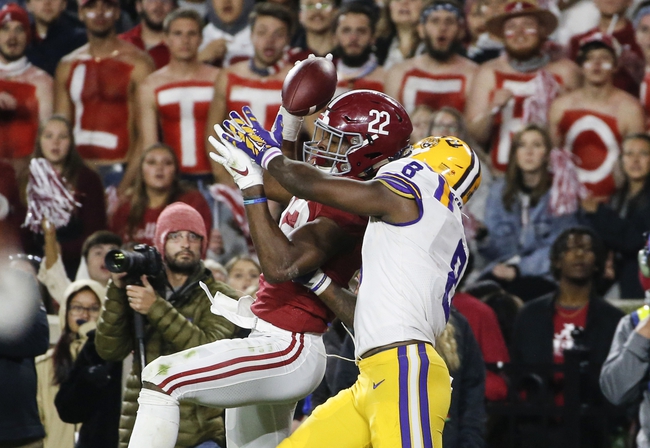 The Line: LSU Tigers +2.5 Click to Get Latest Betting Odds

Alabama is coming out of a very nice—yet still disappointing—campaign in 2019, finishing at 11-2 overall and 6-2 in a difficult SEC. The Tide earned a trip to the Citrus Bowl, where they took out Michigan 35-16 to end the year on a high note. As for LSU, they had one of the most dominant runs in college football history last year with a perfect 15-0 record, an SEC Championship win over Georgia and a CFP National Championship versus Clemson. Check back all season long for free college football picks and college football predictions at Sports Chat Place.

Let’s take a closer look at both teams and see if we can get an idea of how things might play out when the Tide meet the Tigers on November 7.

It’s difficult to imagine Alabama going relatively unnoticed, but that was the case in 2019. The Tide managed a great season by most measurements, but LSU stole all the headlines with their undefeated campaign and Alabama had to settle for second place in the West Division. The Tide played tough in both of their losses and nearly pulled them out, falling 46-41 to LSU and 48-45 to Auburn. The Iron Bowl loss certainly does sting, but the Citrus Bowl win afterward is at least some consolation. In any case, 2020 marks the 14th season of Tide head coach Nick Saban, who will attempt to get the team back into the CFP mix. Alabama returns a strong roster to the field this season and are early favorites to make the playoff, so expect to hear lots of conversations about QBs Mac Jones and Bryce Young, as well as RB Najee Harris—who may very well be competing for the Heisman this season.

Over on the LSU side, their epic 2019 run was one for the ages, and there’s really very little to complain about. The Tigers began the year ranked No. 6 in the preseason AP poll and were projected to finish behind Alabama in the West Division. Instead, LSU surged to an undefeated record with big wins over talented teams like Texas, Florida, Auburn and Alabama, and really didn’t have a ton of trouble with their postseason games. Following a season like that is no easy task, but in 2020 head coach Ed Orgeron enters his fourth full year at the helm and has a great system in place. Quarterback Joe Burrow is gone, taking with him 5,671 yards and 60 touchdowns, but fourth-year junior Myles Brennan appears ready to take the reins. The Tigers also have a couple of good sophomore running backs in Chris Curry and Tyrion Davis-Price, and really solid receivers like Ja’Marr Chase (84 catches, 1,780 yards and 20 TDs).

Pick: I’m going Alabama, but it’s a tough one. I think this is the Tide’s year to take back the West; they’re returning a healthy crop of talent and shouldn’t have too many issues asserting themselves on the scoreboard. There are some very stout SEC teams on the Tide’s schedule this season: Georgia, LSU and of course Auburn, but provided Alabama plays to their capabilities they should be able to make it through those without too much struggle. There will probably be a loss somewhere along the way (maybe even here), but as an early-look pick at less than a field goal I still feel okay about the Tide. It’ll be a must-see game regardless.