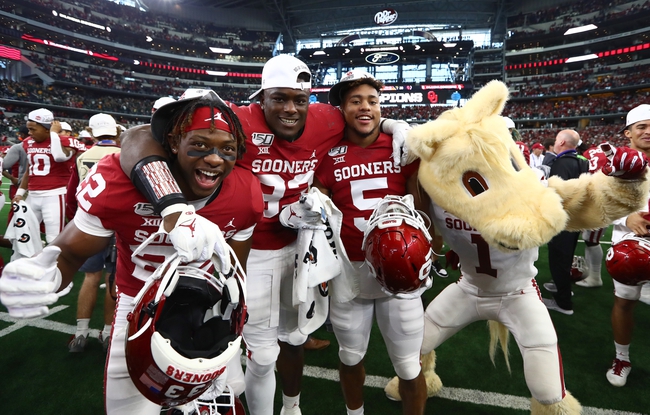 Caleb Williams, a 5-star recruit and arguably the best quarterback of the 2021 college football recruiting class, will make his college decision on July 4.

With offers from nearly every school in the country, Williams has trimmed his list down to LSU, Maryland and Oklahoma. All of these schools can make a case for why they’re going to be the selection, but there’s only going to be one winner. Check back all season long for free college football picks and college football predictions at Sports Chat Place.

Let’s break this thing down.

Oklahoma: Williams has made two unofficial visits to Oklahoma, including the most recent visit in early March before the coronavirus put everybody on lockdown. Williams has a great relationship with Lincoln Riley, a coach who has helped make Kyler Murray and Baker Mayfield first overall picks while also turning Jalen Hurts into a second round pick. The Oklahoma Sooners currently don’t have another quarterback on their roster besides Spencer Rattler, who could soon turn his attention to the NFL draft as well. Playing time available, track record of getting QB’s to the pros and the consistent interest is why Oklahoma is the favorite to land Williams.

Maryland: Williams made an unofficial visit to Maryland in June of 2017 and received an offer later that year. It’s the home school for Williams who is from Washington DC and currently goes to Gonzaga High School. If there was ever a time to stay home, it’s probably now considering Maryland has a top-20 recruiting class in the country with three 4-star commitments and may guys Williams has built a relationship with over the years. The one thing that throws a monkey wrench in the feel good story is that Taulia Tagovailoa recently transferred to Maryland, and he has a relationship with coach Mike Locksley with him being Alabama’s former offensive coordinator. Top recruits want to play right away and a potential position battle complicates things.

LSU: Williams attented school camp at LSU in June of last year and took an unofficial visit back in November. It wasn’t that long ago when LSU was riding the wave of momentum and was considered the frontrunner to land Williams. That was until Joe Brady left for the Carolina Panthers and Jorge Munoz bolted for the Baylor Bears. LSU has extended its dead period until the end of July, meaning Williams would have to commit without ever meeting the new coaches face to face. You can do all the FaceTime and Zoom meetings you want, but nothing makes up for the personal connection and the vibes you get of sharing a room with these guys. LSU lost a lot of steam over these last few months.

Prediction: Maryland is on a tear recruiting wise and you can never pass over a kid wanting to play for the hometown school. Williams instantly puts Maryland on the map and makes the Terps a force in the Big Ten. However, competition for playing time can be a turn off to players looking to see the field right away, and Williams wouldn’t have that issue at Oklahoma. He’d also be going to a school that’s producing NFL quarterbacks at a ridiculous clip and he has a good relationship with the head coach. The Oklahoma Sooners seem too good to pass up.