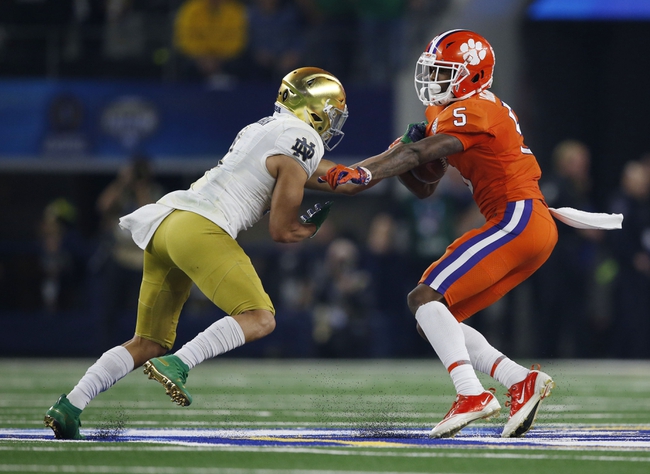 Clemson had an excellent season in 2019, going 14-1 overall and a perfect 8-0 in ACC play. The Tigers won the conference championship over Virginia, then the CFP Semifinal over Ohio State, but were stopped short of the national championship with a 42-25 loss to a great LSU team. As for Notre Dame, they had a nice campaign last year as well with an 11-2 overall record. The Irish earned a trip to the Camping World Bowl, where they beat Iowa State 33-9. Check back all season long for free college football picks and college football predictions at Sports Chat Place.

Let’s take a closer look at both teams and see if we can get an idea of how things might play out when the Tigers meet the Fighting Irish on November 7.

Clemson had some big shoes to fill after their national title in 2018, so last year’s campaign had a ton of expectations. The Tigers’ national rankings suffered due to their relatively weak strength of schedule, but the team did its job in going undefeated and pushing through to the CFP National Championship. LSU had one of the most charmed college football seasons in history, so there really should be no shame for Clemson there. In any case, Tigers head coach Dabo Swinney is back in his 12th full year at the helm, and after going 117-23 during the 2010s decade, it’s safe to say he knows what he’s doing. There’s still a ton of talent on the Clemson roster as well: QB Trevor Lawrence and RB Travis Etienne are back, and primed to be two of the best players in the country. With Frank Ladson and Joseph Ngata catching passes, that Tigers offense is set to be dominant once again.

Over on the Notre Dame side, they came into 2019 with big expectations as well, but a rough schedule against some very talented teams didn’t help. The Irish lost to No. 3-ranked Georgia in September, then No. 19-ranked Michigan (by an ugly 45-14 score) a few games later. That loss knocked Notre Dame out of the No. 8 national spot, and they couldn’t recover. Still, no one is going to scoff at 11 wins and a bowl victory. On to 2020, and head coach Brian Kelly is back on the Irish sideline for his 11th season. He gets a new OC in Tommy Rees this year, and they’ll try to help QB Ian Book develop further on the field. Notre Dame does have some obstacles, however: the team’s top three receivers are gone, there are question marks at RB and this year’s schedule is no joke. It’ll be an interesting season for the Irish, to say the least.

Pick: I like Clemson better right now. The Irish may have some early bumps, and with that difficult slate of games it may be hard for Notre Dame to find a good rhythm. Things should be smoothed out by the time this matchup rolls around, but considering the sheer volume of returning talent in an established system that Clemson has, there’s just no question the team is going to be very good. If the line in this one expands as we inch closer to game day I’ll obviously have to take another look at it, but at this point I feel comfortable on Clemson at anything below double-digits as an early-look pick.