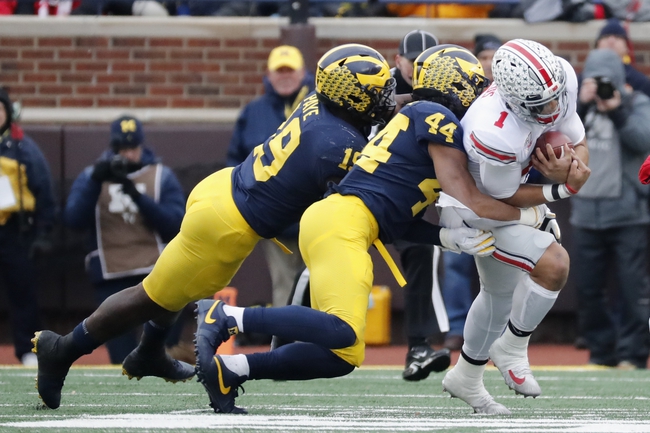 Michigan is coming out of a 2019 in which they went an underwhelming 9-4 and 6-3 in Big Ten play. The Wolverines earned an invitation to the Citrus Bowl, where they fell to Alabama 35-16. As for Ohio State, they had a strong season with a 13-1 overall record and a perfect 9-0 in the conference. The Buckeyes won the East and beat Wisconsin 34-21 in the Big Ten Championship Game, but lost to Clemson in the CFP Semifinal 29-23. Check back all season long for free college football picks and college football predictions at Sports Chat Place.

Let’s take a closer look at both teams and see if we can get an idea of how things might play out when the Wolverines meet the Buckeyes on November 28.

Michigan’s struggles were evident early in the 2019 season, with a narrow 2OT escape over Army and a bad loss at Wisconsin the next week—and that was all still in September. Though the Wolverines did record some nice victories last year like Iowa and Notre Dame, they were all over the place otherwise. There was a near-miss loss at Penn State, and also the eighth straight head-to-head loss in the game against the Buckeyes; compound that with the bad Citrus Bowl loss and there’s not much to look back on with fondness. Anyhow, on to 2020, and head coach Jim Harbaugh steps in for his sixth season at the helm. This will be a telling year for OC Josh Gattis, who starts fresh at some impact positions and will continue to tweak the offense. That’s all going to start with Michigan’s unsettled quarterback position—we’re looking at either Dylan McCaffrey or Joe Milton there. In short, there are some question marks and it very well may look like a relative rebuild year for Michigan.

Over on the Ohio State side, they were able to climb all the way up to the No. 1 ranking by the end of the regular season in 2019, and snatched their third straight conference title in the process. Everything was going smoothly until the final poll of the season, which put the No. 2 Buckeyes in the Fiesta Bowl against third-ranked Clemson. We all know what happened there. Heading into this 2020 season (which will be head coach Ryan Day’s second), the Buckeyes will try to capture the magic of last year’s team, which averaged a whopping 46.9 points and 529.9 yards per game. Justin Fields is back under center and will be on Heisman watch this year, but there are certainly holes to fill when it comes to replacing players like JK Dobbins. The good news is that the Buckeyes have plenty of talented candidates across the roster.

Pick: I’m going to stick with Ohio State. Sure, Michigan has to win one of these head-to-head games at some point, but I don’t think it will be this year. The Wolverines have some work to do when it comes to developing consistency against the big-name teams this season—especially on offense—and with all the major questions there (not to mention a rough schedule) it’s hard to see Michigan finding double-digit wins in 2020.

As for Ohio State, they should regain form quickly and once again roll through the Big Ten. Michigan might surprise me of course, but as an early-look pick I feel good about the Buckeyes at anything under 10 or so.