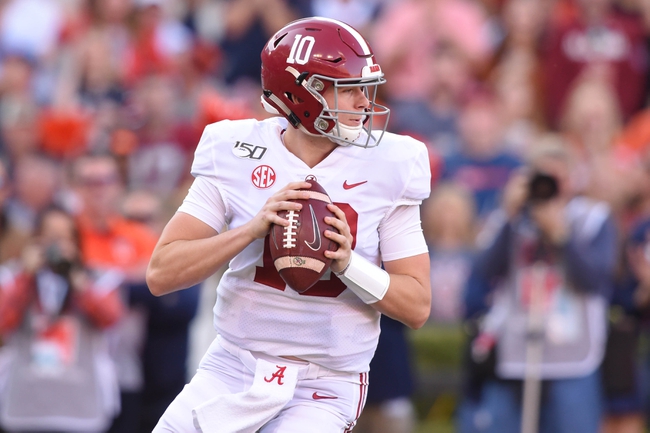 THe Alabama Crimson Tide are coming off of their first season missing the CFP Playoffs and hope to make a return.

The Alabama Crimson Tide enter the 2020 college football season coming off of what some Alabama fans would call a disappointing season by their standards. A 10-2 record saw the Tide miss out on the National Championship playoffs for the first time since the tournament’s inception in 2015, but the Tide would beat Michigan in the Citrus Bowl 35-16 as a consolation prize. Giving up 46 and 45 points to LSU and Auburn in the same season is very un-Alabamalike, and only time will tell if Nick Saban can right the ship for the upcoming season. Check back all season long for free college football picks and college football predictions at Sports Chat Place.

Let’s take a look at Alabama’s schedule for the 2020 college football season.

The good news for the Tide is that Mac Jones is back with some valuable experience after Tua Tagovailoa missed a bunch of time with injury last season. Jones threw for over 1,500 yards with 14 touchdowns and 3 picks. But Jones will have to look over his shoulder as five-star recruit Bryce Young will have arrived for his freshman season at Alabama. Najee Harris is also back in the backfield after rushing for 1,224 yards and 13 touchdowns last season. DeVonta Smith and Jaylen Waddle are also back as the top dogs in Bama’s receiving group, after Smith led the Tide in receiving with 1,256 receiving yards and 14 TDs while Waddle showed promise with 33 catches for 560 yards and 6 scores. On defense, Dylan Moses is back with a clean bill of health after suffering a knee injury last season that took away his 2019 season after leading Alabama with 75 total tackles in 2018. Christian Harris and Shane Lee picked up a ton of experience due to injuries last season, and adding Moses into the fold makes Alabama an intimidating front seven right off of the bat.

Alabama’s win total is set at 10.5 and just looking at the line at the time of posting, there’s a heavy amount of juice on the over, so siding with the under for a second straight 10-win season could hold some value with Georgia early on and a couple of uncomfortable dates at LSU and in the Iron Bowl at the end of the year. However, I do think that Alabama bounces back after last year and come in with a bit of a self-imposed chip on their shoulder, knowing that the team is better than what we saw near the end of last season. USC is a tough task, but Alabama will have had the whole offseason to prepare for it, and getting Georgia at home with a new QB is a slightly more favorable spot for Bama as well. The total could come down to the last couple of weeks of the season as Texas A&M and Auburn are the teams that have given Bama fits over the years. Even still, I think Alabama finishes the year 11-1 at worst, so while it’s heavily juiced, I see no other option but to take the over 10.5 wins on the Crimson Tide this season.