Who Has the Most Receiving Yards in College Football History? 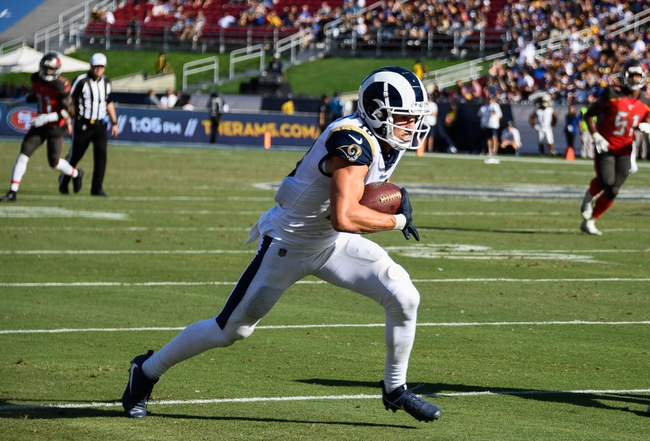 The College Football Players with the Most Career Receiving Yards

These are the top ten college football players with the most career receiving yards.

The modern game of football is very pass-friendly, so it makes sense to see a heavy dose of recent players on the all-time record list. Unless there’s an upcoming rushing renaissance in the college football world, you can count on plenty of new names flirting with the top spots here for years to come. Check back all season long for free college football picks and college football predictions at Sports Chat Place.

1. Cooper Kupp, Eastern Washington, 6,464 (2013-16) - Kupp’s accomplishments as a college receiver are pretty darn legendary. In addition to leading the career receiving yards list, he also set the FCS record for most career receptions with a mind-boggling 428. Kupp racked up 73 touchdowns and carried a 125.7 yards-per-game average with Eastern Washington. After graduating, Kupp was drafted by the Los Angeles Rams and made an immediate impact on the team.

2. Corey Davis, Western Michigan, 5,278 (2013-16) - Davis stormed onto the scene as a freshman at Western Michigan, logging 67 catches for 941 yards and six scores. His performance culminated in his senior season, where he managed 97 grabs for an even 1,500 yards and 19 touchdowns. In 2017, Davis was selected at No. 5 overall by the Tennessee Titans.

3. Trevor Insley, Nevada, 5,005 (1996-99) - Insley is one of three 20th-century players we have on the career receiving yards list. He made First-team All-Big West in 1998 and 1999, and was a Second-team All American in his senior season after posting a whopping 2,060 receiving yards. Insley’s NFL career never really took off, however; he had just 14 catches for 165 yards and a TD while with the Colts.

5. Justin Hardy, East Carolina, 4,541 (2001-14) - Hardy’s college football story is an inspiring one. He walked on to East Carolina in 2010 and earned a scholarship the next year. Hardy set records his freshman season with 658 yards on 64 receptions, and he eventually earned the Burlsworth Trophy in 2014. After graduating, Hardy was drafted by the Atlanta Falcons in the fourth round.

7. Patrick Edwards, Houston, 4,507 (2008-11) - Edwards earned himself a walk-on position with Houston and sat out the 2007 season as a redshirt. That seasoning helped, because Edwards came into 2008 as a starting wide receiver and would post 634 yards with four scores that year. In 2011 Edwards was C-USA Offensive Player of the Year and spent some time with the Detroit Lions.

8. James Washington, Oklahoma State, 4,472 (2014-17) - We’ve got a pair of OK State guys in the next two spots, starting with Washington. He finished his collegiate career off with 74 catches for 1,549 yards and 13 scores in 2017, winning unanimous All-American and Biletnikoff Award honors. Washington was selected in the second round of the draft by the Pittsburgh Steelers and went on to a pro career.

10. Ryan Yarborough, Wyoming, 4,374 (1990-93) - We’ll finish off the receiving yards list with Yarborough, who at one point held the record for career games with a touchdown reception (27). Though Yarbrough really racked up the stats in college, he finished off his NFL career with a relatively tame 44 receptions for 494 yards and three touchdowns. He also played for the XFL’s Chicago Enforcers in 2001.

The pick in this article is the opinion of the writer, not a Sports Chat Place site consensus.
Previous Pick
Who Has the Most Receptions in College Football History?
Next Pick
Oregon State vs. Oklahoma State - 9/3/20 Early Look College Football GOY Pick, Odds, and Prediction