The Arkansas State Red Wolves are coming off an eight-win season that ended with them beating FIU in the Camellia Bowl. The Arkansas State Red Wolves averaged 33.7 points per game and 439.3 yards while allowing an average of 34.2 points and 478.3 yards per game. Layne Hatcher returns at quarterback after passing for 2,946 yards and 27 touchdowns while completing 65.8 percent of his passes. Jonathan Adams Jr. is back as the top receiver after catching 62 passes for 851 yards and leading rusher Marcel Murray is back in the backfield after racking up 820 yards and six touchdowns as a sophomore. Arkansas State lost its top-four tacklers from last season, but linebacker Caleb Bonner returns after 62 tackles, Forrest Merrill is back on the line after 3.5 sacks and Antonio Fletcher returns after four tackles for loss and five pass deflections.

The Memphis Tigers won the AAC last season with 12 games and earned themselves a spot in the Cotton Bowl against Penn State. The Memphis Tigers averaged 40.4 points per game and 485.1 yards while allowing an average of 26.4 points and 383.5 yards per game. Memphis has a new head coach in Ryan Silverfield, but not much is expected to change with Brady White at quarterback after a season where he threw for 4,000 yards and 33 touchdowns. Running back Kenneth Gainwell is going to sit out this season, but Kylan Watkins was good last year in a limited role and could surprise some folks with an expanded workload. Leading receiver Damonte Coxie is also back in the mix, giving Memphis one of the more explosive offenses in the entire country. Defensively, Sanchez Blake Jr. returns after 69 tackles and two interceptions, Joseph Dorceus is back after five sacks and O'Bryan Goodson returns to the defensive line after seven tackles for loss.

The Memphis Tigers are absolutely staked on offense yet again and should probably be the favorites to repeat as AAC champions. Memphis is going to score a ton of points this season. The Arkansas State Red Wolves will have some adjusting to do defensively after missing their top-four tacklers from last season. However, Arkansas State can move the football in their own right and has an accurate, experienced quarterback. The Arkansas State Red Wolves also went toe-toe-toe with a talented SMU team last season, losing by just seven points in their opener. Arkansas State isn't some pushover team from the Sun Belt, and I expect the Red Wolves to put up a bit of a fight.

Give me the boatload of points. 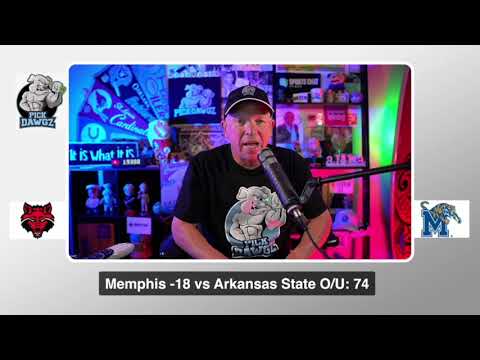