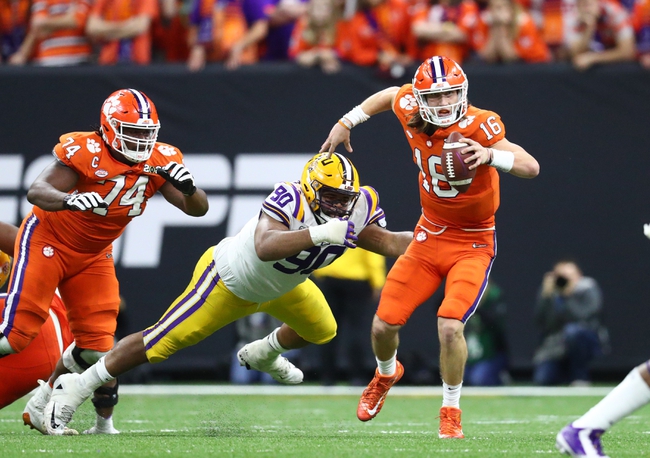 The Clemson Tigers take on the Wake Forest Demon Deacons in an ACC college football matchup from Truist Field on Saturday night.

The Clemson Tigers come into the 2020 season looking to finish the job once again after falling just short in 2019, finishing the season with a 14-1 record, which included an 8-0 conference record to finish atop the Atlantic division and earn a spot in the ACC title game where Clemson crushed Virginia 62-17. The Tigers took down Ohio State in the College Football Playoff semifinal by a final score of 29-23 before falling in the national title game to LSU by a final count of 29-23. Trevor Lawrence is back once again at QB for the Tigers after throwing for 3,665 yards, 36 touchdowns and just 8 interceptions last year. Travis Etienne also decided to stay at Clemson for one more season after pushing his career totals at Clemson to over 4,000 rushing yards with 56 touchdowns as well as 54 receptions for 567 yards and six touchdowns. The receiving corps took a hit with Tee Higgins going pro and Justyn Ross out for the year after spinal surgery, but Frank Ladson, Joseph Ngata and Amari Rodgers are a talented trio of receivers that Lawrence can get the ball to as well as top recruit EJ Williams. Defensively, the Tigers lose a huge chunk of last year’s squad, with leading tackler and the top linebacker in the country Isaiah Simmons gone to the NFL. The Tigers also lost three of the next four tacklers down the line as well as top defensive backs AJ Terrell and K’Von Wallace. Xavier Kelly is also transferring to Arkansas, mainly because he was the odd man out and Xavier Thomas is out for the year as well after opting out for health reasons. Justin Foster, Tyler Davis and Nyles Pinkney are going to be names you’ll want to watch for while James Skalski leads the linebackers after coming in 2nd with 90 tackles for Clemson last season. Derion Kendrick is the only defensive back that was a starter last year that is there coming into this season, but he’s a good piece to build around and Nolan Turner is most likely to be one of those pieces after putting forth 48 tackles last season. Only time will tell if Dabo Swinney can lead his guys back to the promise land as it almost feels like the title is Clemson’s to lose in most circles.

The Wake Forest Demon Deacons will hope to start the year on a high note to build on a decent 2019 season that saw the Demon Deacons finish with an 8-5 record including a 4-4 record in conference play, tying for 3rd in the Atlantic division and earning a berth in the Pinstripe Bowl, a game that Wake lost to Michigan State by a final count of 27-21. Jamie Newman is gone from the Wake squad after transferring to Georgia then deciding to opt out of the season over health concerns, but Sam Hartman is capable of leading the way as he did in 2018. The problem for Hartman and the offense is that a lot of last year’s pieces are gone, including top receiver Sage Surratt. Donavon Greene is back after logging 13 catches last year but this is still a group of receivers with decent size that can make an impact as time goes on. The rushing game will need to be retooled as well with leading rusher Cade Carney done with the team, but Kenneth Walker and Christian Beal-Smith should provide a solid one-two punch for the Demon Deacons out of the backfield. Defensively, Ryan Smenda and Ja’Cquez Williams lead the linebacking corps after Essang Bassey and Justin Strnad finished up with Wake Forest. The secondary needs retooling as well as both starting corners from last year are done but Ja’Sir Taylor should be in for one of the slots and Trey Rucker should lock down the starting safety gig at either free or strong safety for the Deacons. Carlos Basham returns to lead a Wake Forest defensive line that could end up being the strength of the defensive unit with all four starters from last year’s squad back.

As far as a total for this game goes, I think this is a sky-high number only because I feel like early on, this is a game where Clemson names their score and margin of victory, it’s all about if Wake pulls their weight to contribute to the over and I’m not sure how close we get. I need to see that Wake can operate offensively with their new lineup before instilling any sort of faith in the Demon Deacons going forward, so I’ll side with the under as my free play for this game, but my stronger play is on the side and I have that available as a premium pick that you can find here.