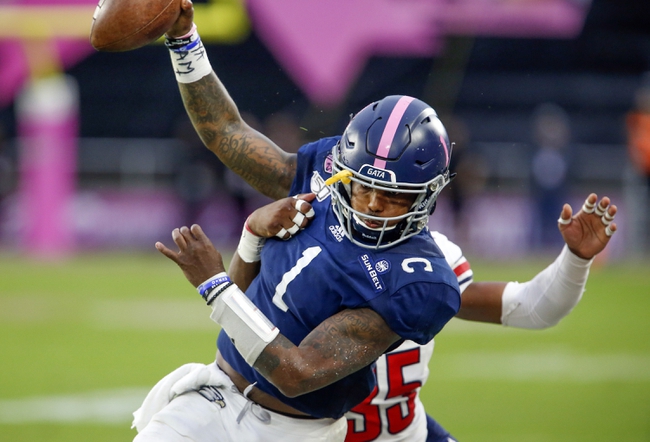 The Campbell Fighting Camels ended their season on a four-game losing streak and finished the year with a 6-5 record. The Campbell Fighting Camels averaged 29.5 points per game and 379.3 yards while allowing an average of 31 points and 418.5 yards per game. Hajj-Malik Williams returns at quarterback after throwing for 2,042 yards and 17 touchdowns while completing 56.5 percent of his passes. Williams also led Campbell last season with 664 rushing yards, so it’s safe to say he’s the engine to make this Fighting Camels offense go. Campbell also returns its two leading receivers in Caleb Snead and Jalen Kelsey, a duo that combined for more than 1,000 receiving yards and 13 touchdowns. Defensively, Justice Galloway-Velazquez returns after leading Campbell with 111 tackles, Brevin Allen returns after 5.5 sacks and Monchovia Gaffney had one interception. The Campbell Fighting Camels have the bulk of last years roster returning, so they should be expecting a successful season.

The Georgia Southern Eagles look to build on their 7-6 record and went 5-1 at home. The Georgia Southern Eagles averaged 28.2 points per game and 327.7 yards while allowing an average of 28.2 points and 413.3 yards per game. Shai Werts returns at quarterback after throwing for 799 yards and nine touchdowns while completing 52.8 percent of his passes. Werts has to be sharper with his throws this season if the Eagles offense is going to be a success. Wesley Kennedy III is the leading rusher after 824 rushing yards and 11 touchdowns, while Malik Murray is back after 20 receptions and Darion Anderson averaged 29 yards per reception on four catches while scoring on two of those plays. Defensively, Reynard Ellis led Georgia Southern with 86 tackles, Randy Wade Jr. had four sacks and Kenderick Duncan Jr. had two interceptions. With more experience and many key players back, Georgia Southern should be much improved on the defensive side of the ball.

FBS teams usually lay monster numbers against FCS opponents and this game is no different. However, let's not act like the Georgia Southern Eagles are some powerhouse that's worthy of laying this sort of chalk. And while the Campbell Fighting Camels had their issues last season, mainly defensively, they hung around with some ranked FCS programs, including taking the 11th ranked Kennesaw State down to the wire. Campbell also returns the bulk of last years roster, so this is an experienced bunch that can compete.

Give me the Campbell Fighting Camels and the points.