The Boston College Eagles will make their season debut after winning six games last year and going 3-3 on the road. Dennis Grosel will likely takeover at quarterback after throwing 155 passes last season for 983 yards and nine touchdowns. Boston College returns a lot of playmakers from last season, including its top three receivers in Hunter Long, Kobay White and Zay Flowers, a trio that combined for 10 receiving touchdowns last season. Boston College will have to replace star running back AJ Dillion, but David Bailey showed promise last year by averaging 5.7 yards per carry and scoring seven times. Defensively, Max Richardson returns after leading Boston College with 108 tackles, Brandon Barlow had 2.5 sacks and Mike Palmer led the Eagles with two interceptions. There’s enough returning production on both sides of the ball for the Boston College Eagles to be sneaky good team in the ACC this season.

The Duke Blue Devils look for a bounce back showing after losing their season opener to Notre Dame by 14 points. The Duke Blue Devils have split their last six home games. Chase Brice is completing 54.1 percent of his passes for 259 yards, zero touchdowns and zero interceptions. Brice has four touchdown passes on his last 122 pass attempts. Eli Pancol and Noah Gray have combined for 146 receiving yards on eight receptions while Jalon Calhoun has five receptions. The Duke Blue Devils ground game is averaging 75 yards per contest, and Deon Jackson leads the way with 52 yards on 15 carries. Defensively, Duke is allowing 27 points and 441 yards per game. Mark Gilbert leads the Duke Blue Devils with seven tackles, Rocky Shelton II has 1.5 sacks and Lummie Young IV has one interception.

The Boston College Eagles are a team that can surprise some folks this season, as they return a lot of key production from last season, and don't be surprised if they're a far more balanced team offensively. However, Boston College has yet to play a game and during these weird times, it's hard to get a proper feel for teams until we actually see them play. The Duke Blue Devils hung around with Notre Dame on the road last week and that's a big confidence boost heading into this contest. If Brice can be a little more accurate with the football, Duke is going to be a respectable team in the ACC once again.

I'll lay the touchdown with the Blue Devils. 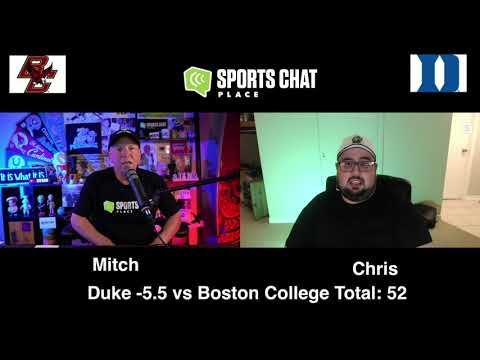