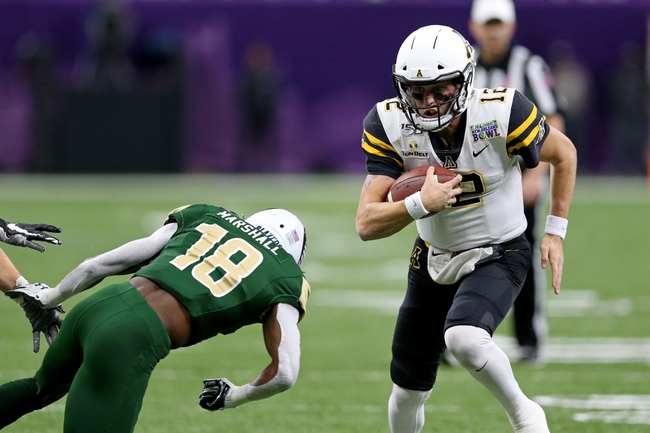 The Appalachian State Mountaineers and the Marshall Thundering Herd meet in a college football matchup from Joan C. Edwards Stadium on Saturday.

The Appalachian State Mountaineers will look to build on a 35-20 win over Charlotte in their last outing. Zac Thomas threw for 204 yards, a touchdown and an interception on 14 of 21 passing while Marcus Williams Jr. rushed for 117 yards and a touchdown. Camerun People had 102 rushing yards and a touchdown and Daetrich Harrington added 50 rushing yards with a pair of touchdowns.Thomas Hennigan far and away led App State’s receiving corps with 5 grabs for 120 yards and a touchdown. Defensively, Trey Cobb had 8 total tackles with 1.5 tackles for a loss while Shemar Jean-Charles and D’Marco Jackson each had 7 total tackles. Brendan Harrington and Kaiden Smith each had an interception as well for the App State defense.

The Marshall Thundering Herd come into this game rested at 1-0 after having last week’s game against East Carolina postponed, with the Herd looking to build off of a 59-0 win over Eastern Kentucky in their season opener. Grant Wells threw for 307 yards and 4 touchdowns on 16 of 23 passing while Luke Zban threw for 38 yards and a TD on 6 of 6 passing in backup action. Knowledge McDaniel had 93 rushing yards to lead Marshall while Brenden Knox had 85 yards and a touchdown on the ground. Sheldon Evans and Lawrence Papillon each had a rushing score as well for Marshall in the win. Talik Keaton had a team-high 68 receiving yards and a touchdown while Broc Thompson had a team-high 5 catches for 67 yards. Xavier Gaines, Garet Morrell and Jaron Woodyard each had 40+ receiving yards and a touchdown for the Herd. Tavante Beckett and Eli Neal each had a team-high 8 tackles for the Herd’s defense with Beckett recording 1.5 tackles for a loss. Nazeeh Johnson also had an interception for Marshall in the victory.

The points with Marshall are tempting as they’re rested and App State allowed Charlotte to hang around for a good chunk of that game. However, the Mountaineers are still a really good team and have a ton of balance on both sides of the ball and while the line feels a bit low for this game, if it’s a trap, I’m biting. I just think Appalachian State’s the better team on both sides of the ball by a wide margin and as such, even on the road, I’ll lay the points with the Mountaineers here.