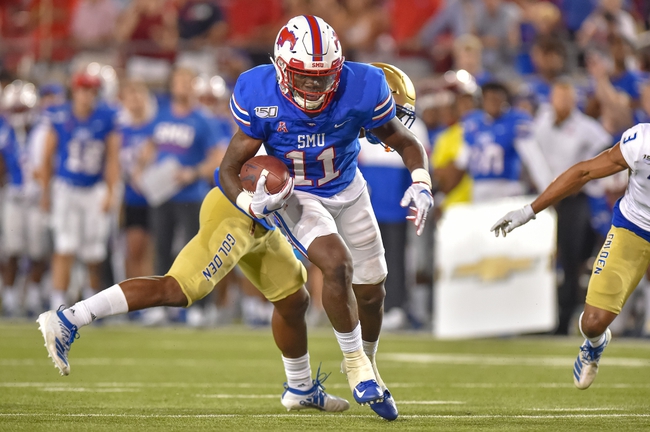 SMU and North Texas duke it out in college football action from Apogee Stadium on Saturday.

The SMU Mustangs come into this one rested after having last week’s game against TCU postponed, with the Mustangs looking to build on a 31-24 win over Texas State to kick off their season. Shane Buechele threw for 367 yards, a touchdown and 2 interceptions on 26 of 36 passing while TJ McDaniel rushed for a team-high 130 yards and a touchdown on 27 carries. Ulysses Bentley IV had 49 rushing yards and a pair of rushing scores for the Mustangs while Rashee Rice led the receivers for SMU with 5 grabs for 101 yards and Reggie Roberson Jr. had a team-high 6 receptions for 99 yards and a touchdown. Danny Gray added 4 catches for 72 yards as well. Defensively, Richard McBryde and Chevin Calloway led the Mustangs with 7 total tackles with McBryde logging 5 solo tackles while Calloway had 4 solo tackles and a fumble recovery.

The North Texas Mean Green will look to build on a 57-31 win over Houston Baptist in their season opener last time out. Jason Bean threw for 217 yards, 3 touchdowns and an interception on 11 of 18 passing while Austin Aune had 111 yards passing and a touchdown on 6 of 11 passing. Oscar Adaway III had 118 rushing yards and a pair of touchdowns on 5 carries while DeAndre Torrey had 85 rushing yards. Jason Bean and Isaiah Johnson each had 40+ rushing yards and a touchdown as well. As far as the North Texas receivers go, Greg White had a team-high 76 receiving yards with a touchdown while Jyairs Shorter had 72 receiving yards and Jaelon Darden had a team-high 5 receptions for 71 yards with 3 touchdowns. Defensively, KD Davis led UNT with 9 total tackles including 7 solo tackles while also recording North Texas’ only sack in the winning effort.

Even with both teams playing subpar competitors in their openers and taking a step up here, these are two of the better offensive teams in the country, with the way SMU runs and guns up and down the field with the aerial offense and North Texas, well, they haven’t missed a beat in their opener in the post-Mason Fine era. I think this is a game that the defenses take a day off once again and it’s all about the offense in this one so I’ll side with the over in a game that could easily hit 80 points when all is said and done.