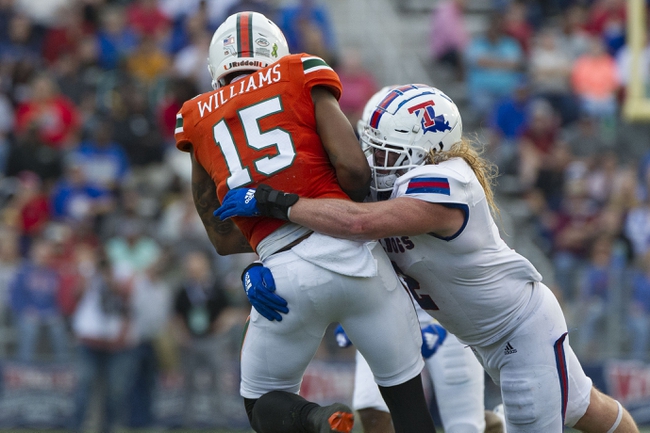 The Louisiana Tech Bulldogs come into the 2020 season looking to take another step forward after finishing 2019 with a 10-3 record, including a 6-2 mark in C-USA conference play. The Bulldogs received an invite to the Independence bowl, a game that the Bulldogs won 14-0. The Bulldogs will have to replace starting QB J’Mar Smith who ended up going pro, but the pieces are there to plug in, as sophomore Aaron Allen is back and is the favorite to take on the starting job. He’ll have some competition in the form of former JUCO transfer Westin Elliott, but Elliott didn’t have much luck in a small sample size last year, posting 4 interceptions compared to no touchdown passes in his limited action. The good news is that Justin Henderson and Israel Tucker are both back in the LA Tech backfield, including Henderson who ran for almost 1,100 yards last season. Malik Stanley’s gone from the receiving group, but the next five top receivers return, led by Griffin Hebert and former TCU Horned Frog Isaiah Graham. Defensively, the Bulldogs will be shaken up a bit as well, with two of the starting D-linemen gone, but Marlon Williams is back after coming up with 59 tackles last season but eight of the top 11 tacklers from last year are gone, leaving LA Tech little to work with. Ezekiel Barnett is back in the linebacking level after putting up 59 tackles last season while Willie Baker and Trey Baldwin are expected to make an impact inside as well. The secondary needs to be retooled as well, but the pieces are there for the Bulldogs to still have a successful year down the field.

The Southern Miss Golden Eagles will look to rebound from a 32-21 loss to South Alabama from their season-opener despite being an 11.5-point favorite. Jack Abraham threw for 314 yards on 22 of 32 passing while Frank Gore Jr. led the Golden Eagles with 32 rushing yards and Kevin Perkins had 30 rushing yards. Don Ragsdale and Naricuss Driver each had a rushing TD while Tim Jones led USM in receiving with 6 grabs for 139 yards. Jason Brownlee also had 5 grabs for 54 yards in the loss. Malik Shorts led USM with 11 total tackles while Swayze Bozeman wasn’t far behind with 10 total tackles and Natrone Brooks had 8 total tackles with 5 solo tackles in the losing effort.

If we’re being honest, I know USM has had a game to shake off the rust and had a week to rest up and prepare for this one, but the Southern Miss looked terrible against South Alabama and realistically, the Golden Eagles fired a bunch of personnel and hoped that would make a change. I think it’ll be some of the opposite here as Louisiana Tech, even without a solid answer at QB is the far better team here and I think the La Tech Bulldogs have a chance at winning this outright. Give me Louisiana Tech and the points.