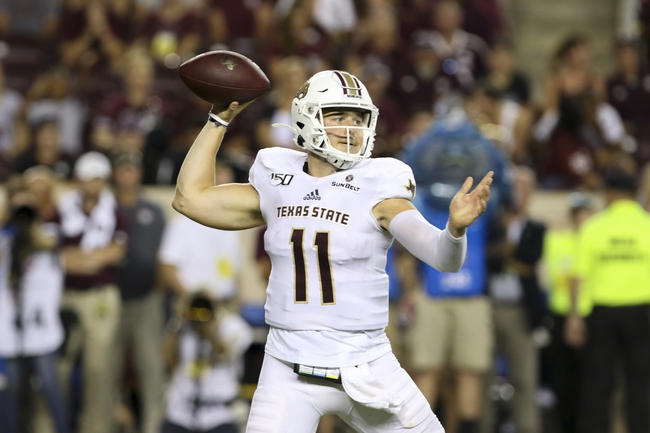 The Texas State Bobcats and the Boston College Eagles meet in college football action from Alumni Stadium on Saturday evening.

The Texas State Bobcats will look to build on their first win of the season coming in the form of a 38-17 win over Louisiana-Monroe last time out. Tyler Vitt has thrown for 602 yards, 6 touchdowns and 2 interceptions on 66.7% passing while Calvin Hill leads the Bobcats with 202 rushing yards and Brock Sturges has 185 rushing yards with both Hill and Sturges recording 2 rushing touchdowns this season. Jeremiah Haydel leads Texas State with 15 catches for 215 yards and 3 touchdowns while Jah’Marae Sheread has 143 receiving yards and Marcell Barbee has 111 receiving yards and a pair of touchdowns for the Bobcats this year. Defensively, Gavin Graham has a team-high 22 total tackles while Jarron Morris has 19 total tackles with a team-high 16 solo tackles and a 100-yard pick-six this season.

The Boston College Eagles will look to build on a 26-6 win over Duke to start the year. Phil Jurkovec threw for 300 yards, 2 touchdowns and an interception on 17 of 23 passing while David Bailey rushed for 51 yards and a touchdown. Zay Flowers led BC’s receiving group with 5 grabs for 162 yards and a touchdown while Hunter Long had a team-high 7 receptions for 93 yards and a score as well. Defensively, Max Richardson led Boston College with 8 total tackles, including 5 solo tackles while Isaiah McDuffie and Jahmin Muse each had an interception for the Eagles.

It’ll be interesting to see how Boston College goes from beating up on Duke to Texas State and then following that up with North Carolina on deck. I think that BC is the better team, but I’m thinking this is a look-ahead spot with the Tar Heels next on BC’s schedule and that’s dangerous enough. But Texas State’s already hung around with SMU and have shown they can score in bunches, and I think they’re capable of sneaking in the backdoor against Boston College in this one. I’ll take Texas State and the points in this one.