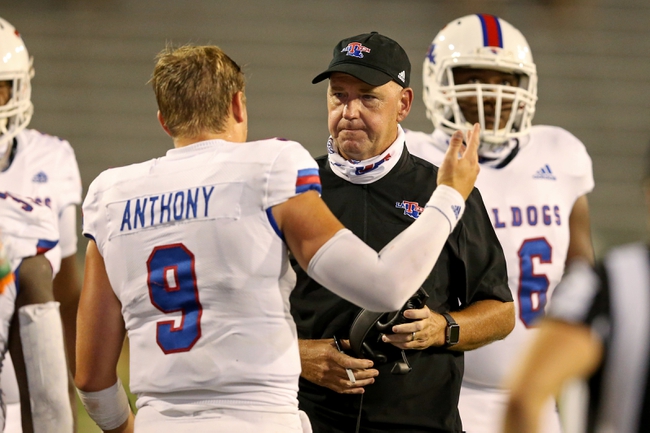 Houston Baptist comes into this matchup at 0-2 on the 2020 season. The Huskies fell to North Texas 57-31 in the opener, then dropped a tough one to Texas Tech on September 12. As for the Bulldogs, they played their first game versus Southern Miss last weekend. Louisiana Tech was victorious in that one 31-30. Check back all season long for free college football picks and college football predictions at Sports Chat Place.

The Huskies had a pretty nice offensive showing in the opener versus North Texas, coughing up 34 points in the second half in a lopsided loss. Houston Baptist quarterback Bailey Zappe posted 480 yards and three touchdowns in that one, and Ean Belk led the rush with 48 yards. Tops in receiving was Ben Ratzlaff with 108 yards and a TD on six catches.

Houston Baptist looked better in their second game versus Texas Tech, but still suffered a difficult loss. Zappe was great there as well on 567 yards and four touchdowns. Josh Sterns collected a whopping 209 yards and two scores on five catches, and Jerreth Sterns had 12 catches for 130 yards and a TD.

Over on the Louisiana Tech side, they’re coming off a successful 2019 campaign with a 10-3 record and a 6-2 mark in Conference USA play. The Bulldogs were West Division co-champions and earned a trip to the Independence Bowl. LA Tech defeated Miami in that one 14-0.

This year in the Bulldogs’ first action versus Southern Miss turned out well, but it was a close game the whole way. Louisiana Tech quarterback Luke Anthony posted 149 yards and three touchdowns, while Justin Henderson led the rush on 69 yards. Adrian Hardy was the top receiver with five grabs for 79 yards and a TD.

Check back for the current trends in this matchup if they are released.

Pick: I like Houston Baptist here. It’s been two games, and we’ve seen the Huskies’ identity. The offense does well in the passing game, and has scored 64 points over the first two outings. Trouble is, that hasn’t been enough—the defense has been a sieve with 92 points allowed. The Bulldogs offense is going to look like a comparative powerhouse here, and this should be another high-scoring game. I think the Huskies can bang out the cover behind that great offense though.