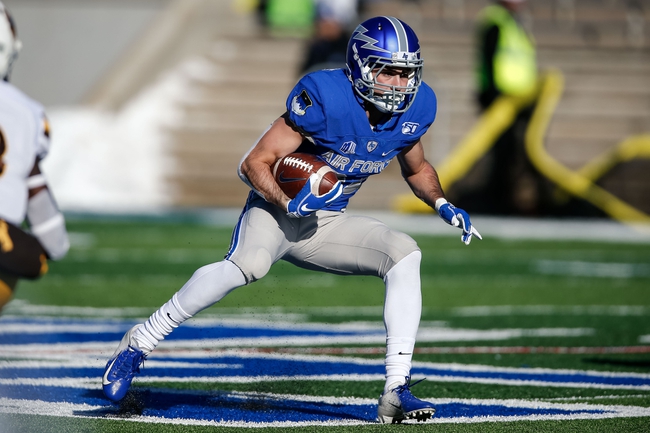 The Navy Midshipmen look for back-to-back road victories to get a game above a .500 record. The Navy Midshipmen have won four of their last five road games. Dalen Morris is completing 53.3 percent of his passes for 155 yards, one touchdown and zero interceptions. Morris enters this game with 15 career pass attempts. Mark Walker and Mychal Cooper have combined for 149 receiving yards and one touchdown while Chance Warren has one reception. The Navy Midshipmen ground game is averaging 161.5 yards per contest, and Jamale Carothers leads the way with 155 yards on 34 carries. Defensively, Navy is allowing 39.5 points and 476.5 yards per game. Diego Fagot leads the Navy Midshipmen with 22 tackles, Ian Blake has 1.5 tackles for loss and Evan Fochtman has one interception.

The Air Force Falcons will make their season debut after producing an 11-2 record last year. The Air Force Falcons have won 10 of their last 12 home games. Donald Hammond III was expected to return at quarterback, but there were reports back in July that he’s no longer in good standing and is likely to miss the entire 2020 season. Hammond passed for 13 touchdowns and rushed for 13 touchdowns, so it’s safe to say that’s a massive blow to this Air Force offense. Air Force loses its top-three receivers from last year but does have an experienced tight end in Ben Peterson and gets its leading rusher back in Kadin Remsberg, who is fresh off a 1,000-yard season. Defensively, Demonte Meeks returns after leading Air Force with 98 tackles, Jordan Jackson had 3.5 sacks and Milton Bugg III had three interceptions. With no Hammond at quarterback, defense is likely going to lead the way early for Air Force and there could certainly be some early growing pains with this club.

This is a rivalry game, so getting Air Force and the free points at home is intriguing, but I'm not sure how much I like the Falcons without Hammond at quarterback. Navy hasn't looked great through two games and nearly blew a game against Tulane, but the Midshipmen have also had a pair of games to knockoff the rust and kind of get in the swing of things. Air Force is coming into this game cold and is without its star quarterback.

I have no choice but to lay the field goal with Navy on the road.