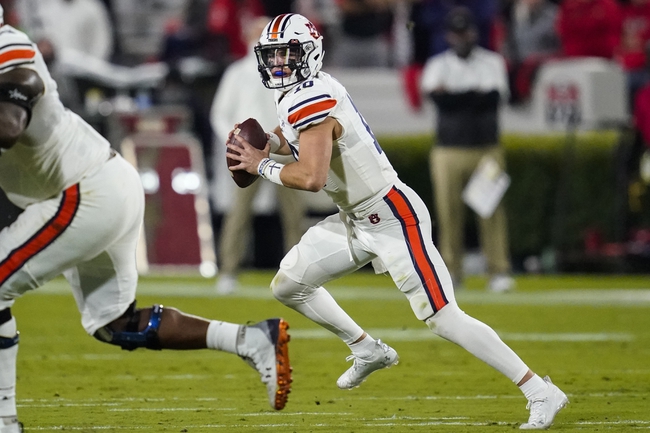 The Arkansas Razorbacks and the Auburn Tigers meet in an SEC college football matchup from Jordan-Hare Stadium on Saturday afternoon.

The Arkansas Razorbacks will look to build on their massive 21-14 road win over Mississippi State to improve to 1-1 this season. Feleipe Franks has thrown for 412 yards, 3 touchdowns and 2 interceptions on 60.9% passing while Treion Smith has a team-high 86 rushing yards. De’Vion Warren has a team-high 128 receiving yards while Treylon Burke has a team-high 8 catches for 112 yards to lead the Razorbacks in receptions. Defensively, Bumper Pool leads the Hogs with 31 total tackles while Grant Morgan has 28 total tackles and Jalen Catalon has 22 total tackles with 16 solo tackles. Dorian Gerald has 1.5 sacks while Joe Foucha has a pair of interceptions.

Part of me wants to invest some stock in Arkansas’ win over Mississippi State, but any team can catch a break once in a while, and it’s a case of not enough of a sample size to trust in Arkansas to do it on back-to-back weeks, especially against an Auburn team that failed to show up against Georgia in a nationally-televised game. Something about this Auburn team just looks off though, to the point where I’m not sure they can get it done even against Arkansas. Instead, I’m going to side with the under as I think we see a low-scoring battle and even if one side takes over the scoreboard, I have a hard time seeing an utter blowout so I’ll back the under.