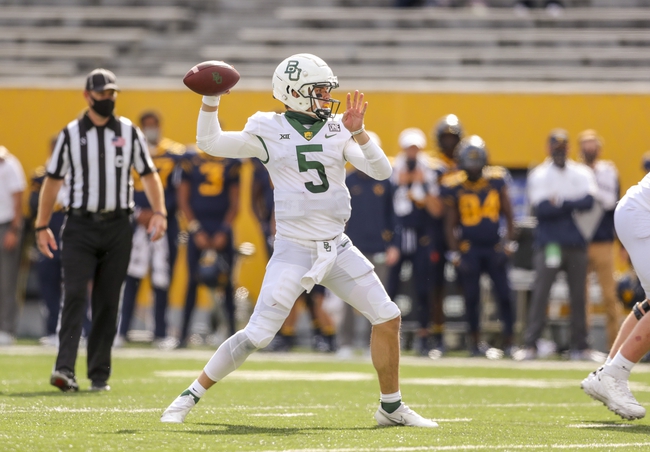 UPDATE: This game has been postponed due to positive virus tests. The makeup date is tentatively scheduled for December 12 or December 19.

Oklahoma State enters this one at 3-0 so far. The Cowboys have recorded wins over Tulsa, West Virginia and Kansas in succession over their first three games. As for the Bears, they’re 1-1 on the 2020 season. Baylor took out Kansas in their opener but then fell to West Virginia in double overtime on October 3. Check back all season long for free college football picks and college football predictions at Sports Chat Place.

The Cowboys have looked solid in their first trio of outings, and they’ve improved with each game. Oklahoma State powered out a sketchy 16-7 win over Tulsa, then beat West Virginia 27-13. In their last game on October 3, the Cowboys beat up on Kansas, bagging a 47-7 blowout victory.

In the win over the Jayhawks, Oklahoma State quarterback Shane Illingworth managed 265 yards with three touchdowns on 17-of-23 passing. Tops in rushing for the Cowboys was Chuba Hubbard with 20 carries for 145 yards and two scores, while Tylan Wallace had nine catches for 148 yards and two touchdowns of his own.

Over on the Bears’ side, it’s been a choppy campaign for more reasons than one. After a couple of postponements Baylor was finally able to get on the field and beat up Kansas 47-14. The second game didn’t go so well for the Bears however, as a plucky West Virginia team handed them a 27-21 defeat in double overtime.

In the loss to the Mountaineers, Baylor quarterback Charlie Brewer managed 229 yards with three touchdowns and two interceptions. Josh Fleeks (three catches) and RJ Sneed (six catches) each had 48 yards and a TD receiving there, and John Lovett had 14 carries for a paltry 23 yards to lead the rush.

PICK: I’m going Oklahoma State here. Baylor is hard to trust right now after their tepid performance against West Virginia (a good team in their own right). The Bears had a competent defensive performance outside of 134 rush yards and three rush touchdowns allowed, but could only muster a wimpy 27 yards on the ground from 33 carries. The Cowboys should be able to take another step forward here, which would make their upcoming game versus Iowa State even more important by coming into it undefeated.