The Georgia Bulldogs and the Alabama Crimson Tide meet in a high-profile SEC showdown in college football action from Bryant-Denny Stadium on Saturday night.

The Georgia Bulldogs will try to build on their 3-0 start after a 44-21 win over Tennessee last time out. Stetson Bennett has thrown for 5 touchdowns and 689 yards on 63.1% passing while Zamir White leads the Bulldogs on the ground with 209 rushing yards and 4 scores. Kearis Jackson leads Georgia far and away in receiving with 19 catches for 300 yards and a touchdown while George Pickens has 8 grabs for 87 yards and 2 TDs. Defensively, Monty Rice leads Georgia in tackling with 12 solo tackles as part of his 18 total tackles. Azeez Ojulari has 3 sacks while Eric Stokes and Richard LeCounte each have a pair of interceptions while Adam Anderson and Channing Tindall each have a pair of sacks this year.

The Alabama Crimson Tide will also try to remain unbeaten after improving to 3-0 with a 63-48 win over Ole Miss last time out. Mac Jones has thrown for 1,101 yards, 8 touchdowns and an interception on 79.5% passing while Najee Harris has a team-high 347 rushing yards and 10 rushing touchdowns. Brian Robinson Jr. also has 154 rushing yards while Jaylen Waddle leads Alabama in receiving with 396 yards and 3 touchdowns. DeVonta Smith has 316 yards and a team-high 3 receiving TDs on 19 catches while DeVonta Smith has 316 receiving yards with a team-high 27 catches and John Metchie III has 298 receiving yards with both Metchie and Smith recording a pair of touchdown grabs of their own. Defensively, Dylan Moses had a team-high 27 total tackles while Jordan Battle had 26 and Christian Harris had a team-high 19 solo tackles.

There’s no doubt in my mind that both of these teams deserve to be where they are. However, as good as Alabama is, we’ve seen some defensive lapses from the Tide lately, nothing catastrophic, but enough to notice. And say what you want about Georgia, but the offense has shown up for the Bulldogs even if it takes a bit to get going and I just see this one coming down to the wire, a situation I can see Georgia hanging around in. I’ll take a shot with Georgia and the points in this one. 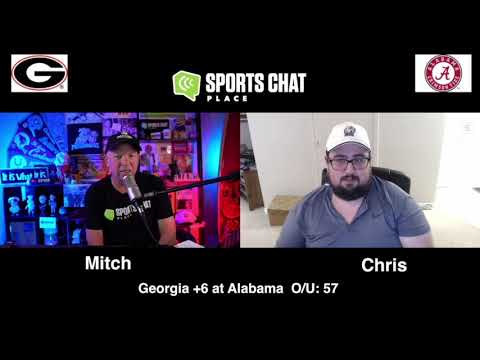