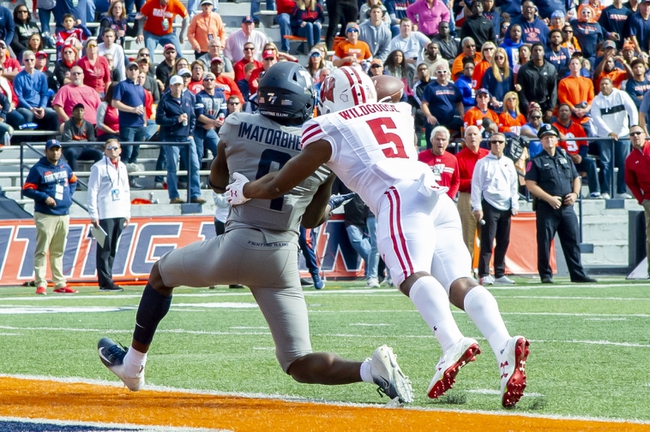 This will be the our first weekend for Big Ten Conference football in 2020, and the first game of the year for both the Illini and the Badgers. Illinois is coming off a 6-7 season in 2019, earning a trip to the Redbox Bowl where they lost to California 35-20. As for Wisconsin, they went 10-4 overall last year but fell in both the Big Ten Championship game to Ohio State and the Rose Bowl to Oregon. Check back all season long for free college football picks at Sports Chat Place.

Illinois didn’t have the greatest football season in 2019, going 6-7 overall and 4-5 in the Big Ten. That finish left the Illini in fourth place in the West Division, which was a nice improvement as Illinois had been predicted to finish last prior to the season.

The Illini had a pretty nice run going in early November last year, and at one point the team was 6-4 on the year. Illinois ended up losing 19-10 to Iowa and 29-10 to Northwestern to close out their last two regular-season games, and couldn’t sustain much in a 35-20 loss to California in the Redbox Bowl.

As for Wisconsin, they stormed out of the gate last year with six straight victories, but ended up having some bumps laster in the season. The Badgers would finish 10-4 overall and 7-2 in the Big Ten, and a head-to-head victory over Minnesota got Wisconsin into the Big Ten Championship game.

Wisconsin’s only regular-season losses in 2019 came 24-23 to Illinois and 38-7 to Ohio State, and the Badgers would go on a four-game winning streak to close out the slate. Wisconsin had some troubles in postseason play however, dropping to Ohio State 34-21 in the Big Ten Championship and 28-27 to Oregon in the Rose Bowl.

PICK: I’m going Wisconsin here. Sure, there are some new faces on the roster and we’ll have a new-look offense, but the team has a great returning core. The Badgers’ defense should be great, and the offensive line is looking good on paper. Jack Coan will be out (injured foot), but Graham Mertz should be able to fill in admirably and take the Badgers to a victory here.