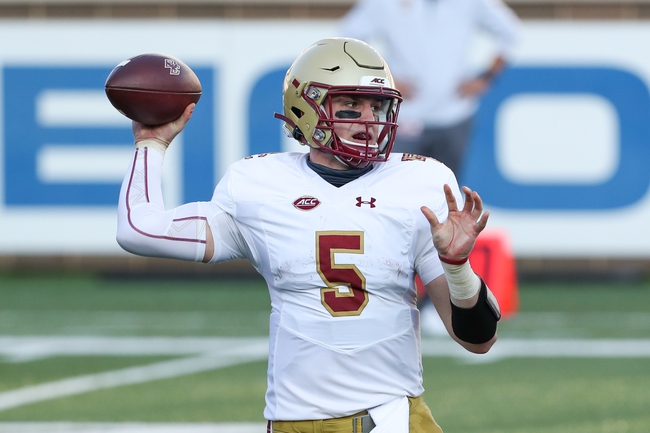 Georgia Tech enters this one at 2-3 so far. The Jackets have posted wins over Florida State and Louisville but otherwise fallen to UCF, Syracuse and Clemson. As for Boston College, they’re 3-2 this season. The Eagles have wins over Duke, Texas State and Pittsburgh alongside losses to North Carolina and Virginia Tech. Check back all season long for free college football picks at Sports Chat Place.

The Yellow Jackets came out of the gate pretty strong at Florida State, pulling off a 16-13 win. The next two games against UCF (49-21) and Syracuse (37-20) were both pretty ugly, but Georgia Tech bounced back with a 46-27 win versus Louisville. Last weekend things got ugly with a 73-7 loss to Clemson, though.

In the loss to the Tigers, Georgia Tech quarterback Jeff Sims posted 81 yards, one touchdown and one interception on 6-of-13 passing. Jahmyr Gibbs led the rush with 67 yards on 15 carries, and Jalen Camp was the top receiver with a 59-yard touchdown catch.

Over on the Boston College side, they opened up with two solid wins 26-6 over Duke and 24-21 over Texas State. The Eagles have gone just 1-2 since then however, with a 31-30 OT win over Pitt sandwiched between losses to North Carolina 26-22 and Virginia Tech 40-14.

In the loss to the Hokies, Boston College quarterback Phil Jurkovec put up 345 yards with two touchdowns and two interceptions in that one, and David Bailey led the rush on 10 carries for 41 yards. Jaelen Gill had six receptions for 104 yards and a touchdown in the loss as well.

PICK: I’m sticking with the Eagles here. Georgia Tech has had a few good outings this season, but their offense can’t keep up with all the points they’re allowing. The Yellow Jackets have given up a whopping 186 points over their last four games, which makes it difficult to record Ws. Boson College isn’t elite by any means, but they’re a pretty solid mid-level team that should be able to put up a good amount points against Georgia Tech.