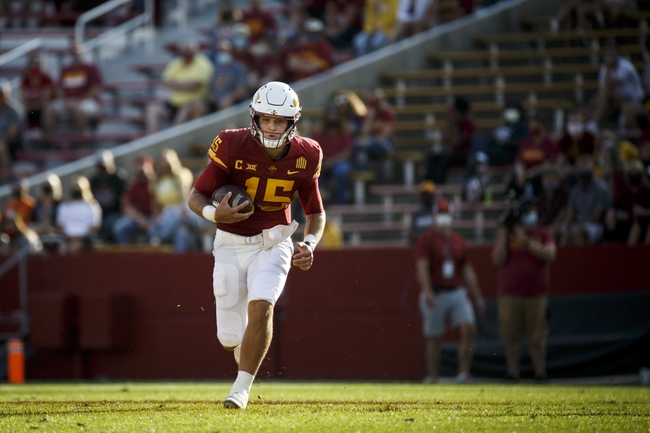 Iowa State enters this matchup at 3-1 so far. The Cyclones fell to Louisiana in the opener but since have taken out TCU, Oklahoma and Texas Tech. As for the Cowboys, they’re 3-0 this season. Oklahoma State has rattled off wins over Tulsa, West Virginia and Kansas in succession. Check back all season long for free college football picks at Sports Chat Place.

In the win over Texas Tech, Iowa State quarterback Brock Purdy posted 302 yards with two touchdowns on 32-of-43 passing. Breece Hall was the top rusher in that one with 135 yards and two touchdowns, and Xavier Hutchinson had nine receptions for 77 yards to lead the team.

Over on the Cowboys’ side, they had a bit of a hiccup in their opener as well, escaping Tulsa 16-7. Since then Oklahoma State has settled into a groove, with wins 27-13 over West Virginia and 47-7 against Kansas in their most recent two games.

In the win over the Jayhawks, Oklahoma State quarterback Shane Illingworth posted 265 yards with three touchdowns on 17-of-23 passing. Tops in receiving was Tylan Wallace with a nice nine receptions, 148 yards and two scores. Chuba Hubbard held down the rushing attack for the Cowboys with 20 carries for 145 yards and two touchdowns of his own.

PICK: I’m going to lean Oklahoma State here, but probably staying away in reality. The Cowboys have gotten progressively better over their first three games and should be in the groove for this one—which is their toughest game yet. Iowa State has been scoring very well with at least 31 points in each of their last three—but they’re also giving up a lot of points to the decent offenses. I think Oklahoma State can get in there for a cover. Should be a fun, competitive game to watch regardless.