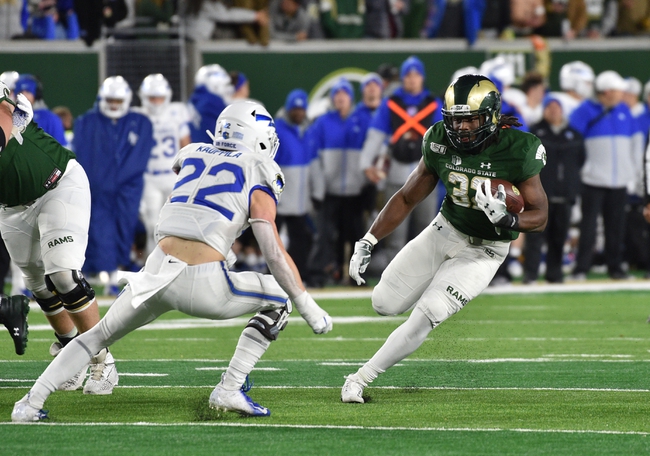 This Game Has Been Cancelled

The New Mexico Lobos won just two games last season and ended the year with nine straight losses. The New Mexico Lobos haven’t won a road game since October of 2018. Tevaka Tuioti returns at quarterback after throwing for 1,400 yards and seven touchdowns. New Mexico returns a wide receiver trio of Jordan Kress, Marcus Williams and Anselem Umeh that combined for 1,200 yards and seven touchdowns. Bryson Carroll is back at running back after rushing for over 500 yards and two touchdowns last season. Defensively, New Mexico lost its top-four tacklers, but Jerrick Reed II is back after 51 tackles, Devin Sanders had 1.5 sacks and Donte Martin had nine pass deflections. New Mexico will have growing pains on defense with so much experience gone, but the offense has potential and it will be interesting to see the growth of Tuioti at the quarterback position.

The Colorado State Rams won four games last season and split their last six games overall. The Colorado State Rams have lost four of their last five home games. Patrick O'Brien returns at quarterback after throwing for 2,800 yards and 13 touchdowns. CSU has a wide receiver trio returning of Dante Wright, Trey McBride and Nate Craig-Myers that combined for 1,600 yards and nine touchdowns. Marcus McElroy returns at running back after averaging 4.6 yards per carry on 80 touches. Defensively, Dequan Jackson returns after 87 tackles with the Rams, Ellison Hubbard had 5.5 sacks and Logan Stewart had two interceptions. Colorado State has a proven quarterback, playmakers on offense and enough returning production on defense to improve on last seasons win total. This should be a decent season for Colorado State, a team that’s won a combined seven games the last two years.

New Mexico won't be as bad as it was last season and there's potential on the offensive side of the ball out of the gate. However, Colorado State is the more balanced team at the moment and that's going to be key with these teams working their way back from such a long layoff. The Colorado State Rams have more ways to win games and they have the more trustworthy quarterback. I'm not thrilled about laying these sort of numbers in season openers, but Colorado State should have its way on offense and eventually pull away in the second half.

Give me Colorado State in a comfortable home victory.