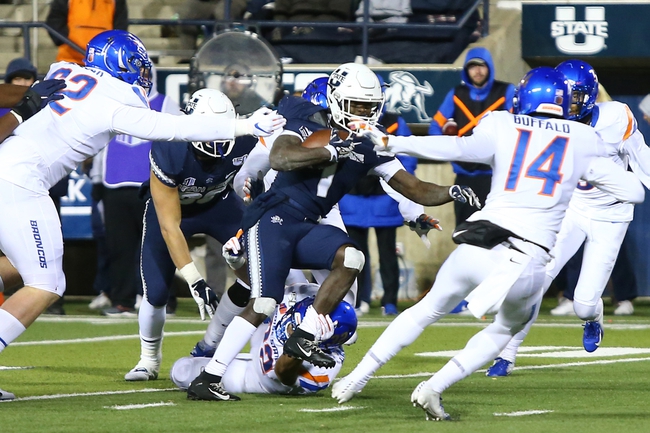 The Utah State Aggies are coming off a seven-win season and have split their last 10 games overall. The Utah State Aggies have split their last six road games. Utah State lost both of its quarterbacks from last season and will likely turn to Andrew Peasley, a freshman who had two pass attempts last year. Utah State has a wide receiver duo in Jordan Nathan and Deven Thompkins that combined for more than 1,000 yards and five touchdowns. Jaylen Warren rushed for over 500 yards and five touchdowns and will return for his senior year. Defensively, Troy Lefeged Jr. returns after leading Utah State with 104 tackles, Nick Heninger had five sacks and Shaq Bond had three interceptions. Utah State has a respectable defense and playmakers on offense. If the Aggies can find a consistent replacement for Jordan Love, they will be a tough out in the MWC this season.

The Boise State Broncos are coming off a 12-win season and have won six straight regular season games. The Boise State Broncos haven’t lost a home game since December of 2018. Hank Bachmeier returns at quarterback after throwing for nearly 1,900 yards and nine touchdowns. Khalil Shakir and CT Thomas return as a wide receiver duo that combined for 1,300 yards and 11 touchdowns while George Holani is back after topping 1,000 rushing yards and seven touchdowns as a freshman. Defensively, Riley Whimpey returns after leading Boise State with 83 tackles, Demitri Washington had 4.5 sacks and Tyreque Jones had one interception. Boise State is once again going to be a contender in this conference, as the offensive playmakers are there and there’s more than enough returning production on the defensive side. We also can’t forget that head coach Bryan Harsin is 40-8 SU against MWC teams through seven years at Boise State.

The Utah State Aggies have some solid returning talent on both sides of the ball, but it's going to take some time breaking in a new quarterback and this is a rough spot to do it. Boise State returns a bunch of production from last season and has been money for the most part both SU and ATS at home over the years. Utah State is 2-6 ATS in its last eight games as a double-digit underdog, while Boise State is 6-4 ATS in its last 10 games as a double-digit favorite. This is a lot of points to lay in a season opener where both teams have had late starts and I'm sure practices have been out of sorts. Still, we know Boise State brings it on its blue field and even when the games aren't always pretty, the Broncos find ways to win and cover numbers.

I trust Boise State to get the job done at home.