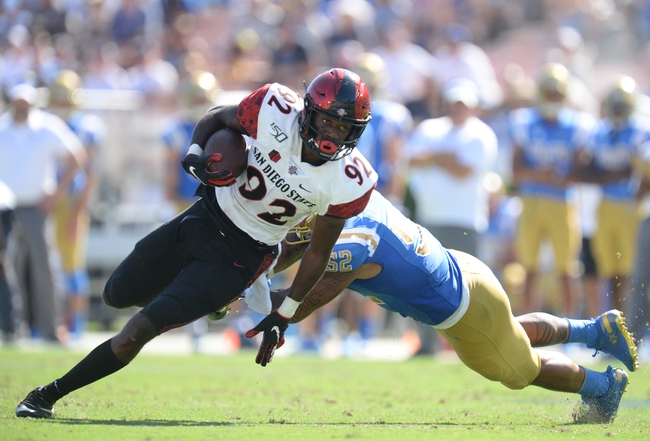 The UNLV Rebels won just four games last season, but two of those wins came in their last two contests. The UNLV Rebels have lost four of their last six road games. Kenyon Oblad returns at quarterback after throwing for 2,000 yards and 18 touchdowns. UNLV returns a wide receiver trio of Randal Grimes, Steve Jenkins and Noah Bean that combined for 1,300 receiving yards and 11 touchdowns. Charles Williams is back at running back after topping 1,200 rushing yards and 11 touchdowns. Defensively, UNLV lost its top-three tacklers, but Farrell Hester II returns after 70 tackles, Bryce Jackson had two sacks and Jalen Graves had one interception. UNLV may have some issues on defense out of the gate, but the Rebels return a ton of production on the offensive side and there’s reasons for excitement. With its starting quarterback, top receivers and leading rusher all back, UNLV has a chance to be one of the better offenses in college football this season.

The San Diego State Aztecs are coming off a 10-win season that ended with a victory in the New Mexico Bowl. The San Diego State Aztecs have won four of their last six home games. Carson Baker should be the starting quarterback for SDSU after 24 pass attempts last year as a freshman. The Aztecs return a wide receiver trio of Kobe Smith, Jesse Matthews and Daniel Bellinger that combined for 1,500 yards and nine touchdowns. Chance Bell is back at running back after piling up 384 rushing yards and two touchdowns. Defensively, Dwayne Johnson Jr. returns to the Aztecs after 92 tackles, Cameron Thomas had 5.5 sacks and Tariq Thompson had four interceptions. SDSU should be much improved on offense with so much returning production, but a lot will be determined by how Baker performs in his first season as a starting quarterback. San Diego State was fifth in college football last season and has its sack leader and playmakers in the defensive backfield to build on that success.

The San Diego State Aztecs are the more balanced team and one of the few clubs in this conference that gets after it defensively. SDSU should be favored in this contest for obvious reasons. However, UNLV is high explosive offensively and has the ability to put up some impressive numbers this season with experience at all key levels. As good as San Diego State is defensively, it's a team breaking in a new quarterback and that always raises questions early in the season. We're getting two free touchdowns with a UNLV team that's going to move the football and put up points this season.

Give me UNLV and the points.