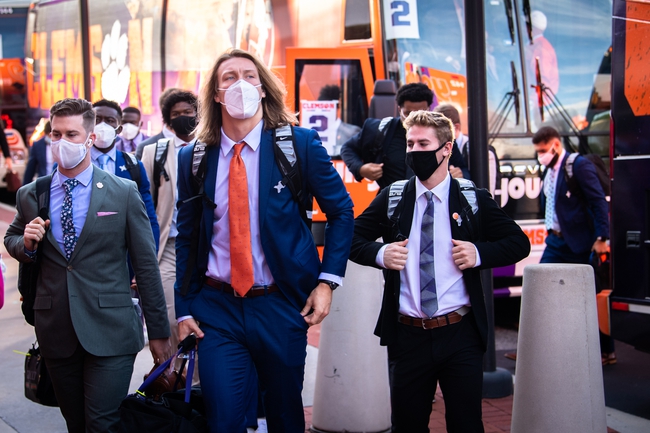 D.J. Uiagalelei Starts Over Trevor Lawrence Due To COVID

Clemson quarterback Trevor Lawrence tested positive for COVID-19 and true freshman D.J. Uiagalelei is going to get the start against Boston College on Saturday.

The loss of Lawrence, who is still the favorite to win the Heisman, turned Clemson from a 30-plus-point favorite against the Eagles to around a 24-point favorite at most shops. So, Clemson is still a heavy favorite regardless of this major news, but there’s no doubt this game has a different feel and it’s a bit concerning if you locked in that massive number earlier in the week.

Uiagalelei is a 5-star recruit from the 2020 class who had offers from Alabama, Florida, Michigan, Auburn, LSU and Ohio State, among others. He stands at 6’4”, weighs 250 pounds and is a great athlete who also played baseball and basketball in high school. In fact, many thought Uiagalelei had a bright baseball future at Clemson if he chose to go that route.

At St. John Bosco High School in California, Uiagalelei threw for over 10,000 yards, 127 touchdowns and 11 interceptions while completing 67.2 percent of his passes. Uiagalelei also rushed for 1,103 yards and 18 touchdowns on 174 carries.

Many rave about Uiagalelei’s arm strength and his feel inside the pocket. Uiagalelei is a great athlete, can extend plays with the rollout and has accuracy when throwing on the run. Uiagalelei has received comparisons to JaMarcus Russell due to his massive build and ridiculous arm strength. Obviously, his play at the collegiate level will give us a better feel of his game and it’s going to be interesting to see just how up to speed he is at this point with the playbook, as he wasn’t expected to start at any point this season.

However, Uiagalelei has played in five games at Clemson, completing 12 of 19 passes for 102 yards. Uiagalelei also has eight rushes for 32 carries and two touchdowns, finding the end zone both times in a shutout win over Citadel.

Uiagalelei wasn’t active in Clemson’s game against Georgia Tech and coach Dabo Swinney mentioned it was due to “getting beat up a bit” in a limited role against Miami the previous week. While that may be coach speech, it does raise an eyebrow or two knowing Uiagalelei will have to shoulder the load as the starter.

First off, Boston College is not be on the level of Clemson in terms of talent up and down the roster, but the Eagles are not a pushover. Boston College has comfortably won the games it’s supposed to win this season and took a highly ranked North Carolina team down to the wire. BC is respectable defensively and is better against the pass than it is the run. I was leaning toward Boston College and the boatload of points before this news.

Knowing Lawrence isn’t playing and even with the line dropping a touchdown, I still want the points. I don’t like betting the unknown and no matter how much potential Uiagalelei has, the bottom line is nobody knows what to expect from his first start, especially on such short notice. Uiagalelei has less than 48 hours to prepare for this game in his new role.

Clemson wins, but I’m not laying more than three touchdowns.