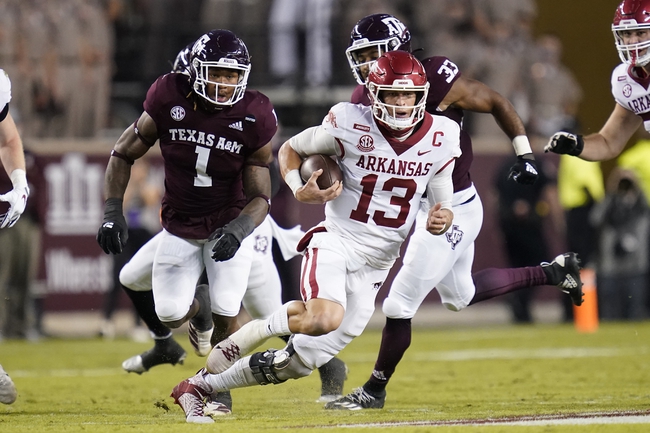 The Tennessee Volunteers visit the Arkansas Razorbacks as they meet in Week 10 SEC college football action from Razorback Stadium in on Saturday night.

The Tennessee Volunteers will be out to snap a three-game losing streak after a 48-17 loss to Alabama in their last game. Jarrett Guarantano has thrown for 914 yards, 6 touchdowns and 3 interceptions on 61.5% passing while Eric Gray leads the Vols in rushing with 355 rushing yards and a pair of touchdowns and Ty Chandler has 275 rushing yards with 2 touchdowns as well. Josh Palmer leads Tennessee’s receiving group with 19 grabs for 295 yards and 4 TDs while Brandon Johnson, Jalin Hyatt and the aforementioned Gray each have 100+ receiving yards this season. On defense, Trevon Flowers leads Tennessee with 35 total tackles while Henry To’o To’o has 33 total tackles with a team-high 17 solo tackles. Deandre Johnson also has 3.5 sacks for Tennessee this season.

The Arkansas Razorbacks will also look to rebound from a 2-3 mark after a 42-31 loss to Texas A&M last time out. Feleipe Franks has thrown for 1,213 yards, 11 touchdowns and 3 interceptions on 66% passing while Trelon Smith has rushed for a team-high 251 yards and Rakeem Boyd has 188 rushing yards with a pair of touchdowns. Treylon Burks has 26 receptions for 366 yards and 4 touchdowns while De’Vion Warren has 12 grabs for 253 yards and 3 scores and Mike Woods has 220 receiving yards this season. Defensively, Grant Morgan has a team-high 58 total tackles while Bumper Pool has 50 total tackles and Jalen Catalon has 46 total tackles with a team-high 30 solo tackles. Hudson Clark has 3 interceptions while Greg Brooks Jr. and Joe Foucha each have 2 INTs this season.

I wish I could say I get Tennessee being favored, but even against solid opposition like Georgia and Alabama (which makes a three-game losing streak a bit more understandable), this is still not the same Tennessee team from the start of the year and the end of last year as the Vols are just struggling right now. This line is a slap in the face to Arkansas, who may be 2-3, but are also 5-0 ATS this season. A lot of those were games where we were getting more points, but the Hogs have done enough and shown enough improvement for me to lean their way as a home dog. I’ll back Arkansas and the points in this game.