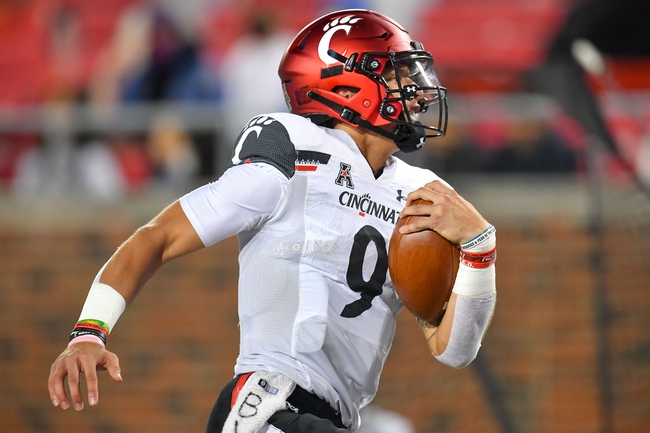 The Houston Cougars will look to bounce back after a 44-21 loss to UCF to drop to 2-2 this season. Clayton Tune has thrown for 1,208 yards, 8 touchdowns and 4 interceptions on 61.9% passing while Kyle Porter leads the Cougars in rushing with 255 rushing yards and 3 touchdowns this season. Marquez Stevenson leads Houston’s receiving group with 278 receiving yards and 3 touchdowns coming on 16 receptions while Keith Corbin has a team-high 17 catches for 213 yards and Tre’von Bradley has 15 grabs for 202 yards this season. Nathaniel Dell also has 11 receptions for 164 yards this season for the Cougars. On defense, Grant Stuard leads Houston with 33 total tackles including 17 solo tackles while Payton Turner has a team-high 4 sacks and David Anenih has 3 sacks for Houston this season.

The Cincinnati Bearcats will look to remain unbeaten, sitting at 5-0 after a 49-10 walloping of Memphis last time out. Desmond Ridder has thrown for 994 yards, 10 touchdowns and 5 picks on 64.8% passing while also rushing for 291 yards and 5 touchdowns. Gerrid Doaks has a team-high 327 rushing yards with 6 touchdowns and Jerome Ford has 227 rushing yards and 4 TDs. Jayshon Jackson has a team-high 203 receiving yards while Michael Young Jr., Josh Whyte, the aforementioned Doaks and Tre Tucker all have 100+ receiving yards with Whyte putting up a team-high 3 touchdowns with 140 receiving yards while Young Jr. leads the group with 144 receiving yards with 2 scores. Tucker and Doaks each have two receiving TDs as well this season. Defensively, Jarell White leads Cincinnati with 49 total tackles including 31 solo tackles while Ahmad Gardner has 3 interceptions and Coby Bryant and Arquon Bush each have 2 INTs. Myjai Sanders also has 5 sacks for the Bearscats this season.

This is a ton of points to give up with Cincinnati against an always threatening Houston offense, but the Cougars stalled against UCF, and the Knights don’t pose the biggest test in terms of an opposing defense. Cincinnati’s shut down and obliterated SMU and Memphis in back-to-back weeks and I’m thinking that they’ll do the same to Houston here. The Bearcats have done nothing but pummel these speed teams and it’s worked out up to this point. I’ll lay the points with Cincinnati in this game.