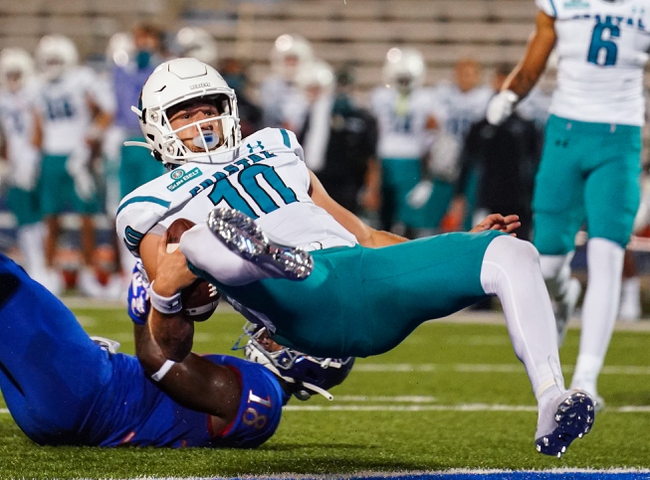 South Alabama sits at 3-3 so far this year. After consecutive wins over Texas State and LA-Monroe, the Jaguars lost last Thursday versus Georgia Southern. As for Coastal Carolina, they’re rolling at 6-0 after destroying Georgia State on Saturday. Check back all season long for free college football picks at Sports Chat Place.

South Alabama has been pretty competitive so far this season, but they’ve let a couple of close games slip away. Two of the Jaguars’ losses came by seven points or fewer, including a three-point loss to Tulane 27-24. The loss to Georgia Southern was a tight one as well; South Alabama fell 24-17.

In the loss to the Eagles, South Alabama quarterback Desmond Trotter posted 200 yards and two touchdowns. Carlos Davis added 70 yards on 20 carries, and Kawaan Baker led the receivers with five catches for 65 yards.

Over on the Coastal Carolina side, it’s been a great run of a half-dozen wins to start the season. The Chanticleers’ only “close” game so far came versus a good Louisiana team; Coastal prevailed there 30-27. Since then it’s been a 28-14 win over Georgia Southern and a 51-0 destruction of Georgia State.

In the win over Georgia State, Coastal Carolina quarterback Grayson McCall put up 254 yards with four touchdowns on 18-of-24 passing. Torrance Marable added 71 yards on 10 carries there, and Jaivon Heiligh had 81 yards and two touchdowns off five receptions.

PICK: I’m sticking with Coastal Carolina. The Jaguars have had a few games where they’ve showcased some potent offensive capabilities, but they’ve also had a few flat outings (like 42-10 versus UAB). The Chanticleers haven’t had a bad game yet and haven’t shown a ton of weaknesses on either side of the ball. I like Coastal Carolina to keep it rolling here and bang out a cover.