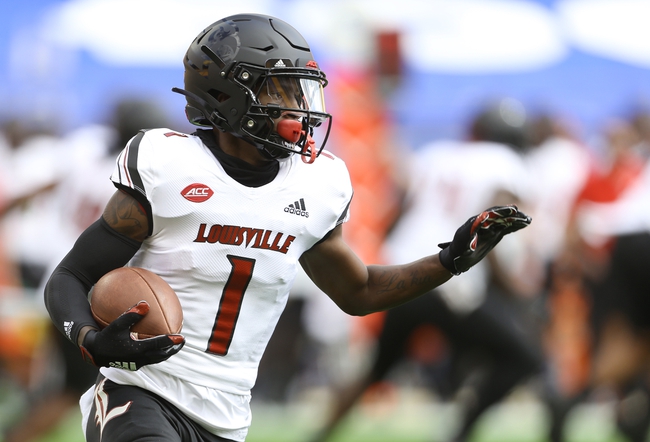 This Game has been Cancelled

The Louisville Cardinals and the Virginia Cavaliers meet in an ACC college football matchup from David A. Harrison III Field on Saturday night.

The Louisville Cardinals will be out to rebound from a 42-35 loss to Virginia Tech to fall to 2-5 on the year. Malik Cunningham has thrown for 1,746 yards, 15 touchdowns and 8 interceptions on 63.4% passing while Javian Hawkins leads the Cardinals in rushing with 822 rushing yards and 7 touchdowns. Cunningham also has 220 rushing yards and 3 TDs and Hassan Hall has 144 rushing yards while Tutu Atwell leads Louisville’s receiving group with 40 catches for 528 yards and 5 touchdowns. Dez Fitzpatrick has 22 grabs for 443 yards and Marshon Ford has 226 yards on 20 catches with 5 TDs. Braden Smith has 11 catches for 225 yards and the aforementioned Hawkins also has 127 receiving yards as well for the Cardinals this season. Defensively, C.J. Avery leads Louisville with 51 total tackles including a team-high 30 solo tackles while Monty Montgomery leads Louisville with 4 sacks this season.

The Virginia Cavaliers will look to build off of a 44-41 win over North Carolina to improve to 2-4 on the year and snap a four-game losing streak. Brennan Armstrong has thrown for 985 yards, 10 touchdowns and 7 interceptions on 55% passing while Lindell Stone has thrown for 426 yards, 3 touchdowns and 3 picks on 56.7% passing. Wayne Taulapapa has a team-high 330 rushing yards and 4 TDs while Armstrong has 287 rushing yards and Shane Simpson and Keytaon Thompson each have 100+ rushing yards for Virginia this season. Billy Kemp IV leads Virginia with 45 catches for 402 yards while Terrell Jana has 28 grabs for 339 yards. Lavel Davis Jr. has 210 receiving yards and Tony Poljan has 205 receiving yards with a team-high 4 TDs and the aforementioned Simpson has 100 receiving yards this season. Defensively, Nick Jackson leads Virginia with 64 total tackles including a team-high 32 solo tackles while Charles Snowden has a team-high 5 sacks and Jowon Briggs has 3 sacks for the Cavaliers this season.

Louisville continues to struggle on the defensive end, but they’re also scoring points in bunches if that counts for anything and I think it counts here as Virginia’s shown that they also have issues when it comes to defending higher-powered offenses like your Clemson’s, NC State’s and Wake Forest’s of the ACC. The Cavaliers showed up against Miami and beat UNC, but I think Louisville is coming out for a track meet that I don’t know if the Cavaliers can keep up in. I’ll take my chances with Louisville and the points in this one.