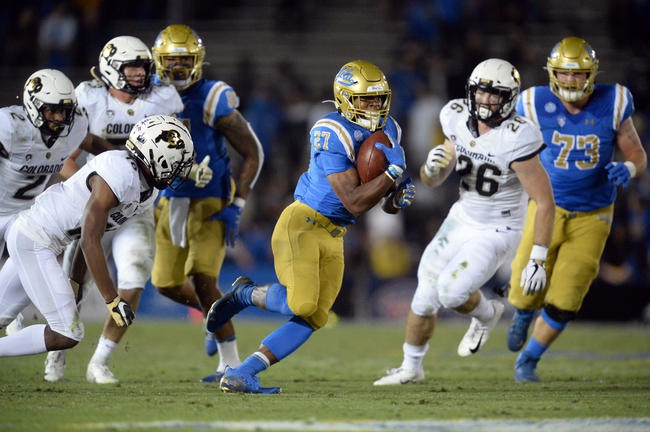 The UCLA Bruins are coming off a disappointing four-win season that ended with three straight losses. The UCLA Bruins have lost four of their last six road games. Dorian Thompson-Robinson returns at quarterback after throwing for 2,700 yards and 21 touchdowns while completing 59.7 percent of his passes. Kyle Philips and Chase Cota return at wide receiver, a duo that combined for more than 1,000 receiving yards and eight touchdowns. Demetric Felton should takeover at running back after racking up 331 yards and a touchdown on limited touches. Defensively, Stephan Blaylock returns after leading UCLA with 86 tackles, Osa Odighizuwa had 3.5 sacks and Jay Shaw had one interception. The UCLA Bruins should be much improved on the defensive side of the ball and the offense has potential assuming Thompson-Robinson becomes a more accurate quarterback. With Chip Kelly entering his third season, UCLA should expect some serious progress.

The Colorado Buffaloes are coming off a five-win season that ended with them losing six of their last eight games. The Colorado Buffaloes have split their last six home games. Sam Noyer gets the nod at quarterback, a senior who has 41 career pass attempts for 179 yards and a pair of interceptions. K.D. Nixon and Dimitri Stanley return, a wide receiver duo that combined for more than 700 receiving yards and five touchdowns. Alex Fontenot is back at running back after leading Colorado with 874 yards and five touchdowns. Defensively, Nate Landman returns after leading Colorado with 114 tackles, Terrance Lang had 5.5 sacks and Derrion Rakestraw had three interceptions. The Colorado Buffaloes have the potential to be one of the best defenses in the Pac-12 this season and the offense has playmakers on the outside and in the backfield. If Noyer can hit the ground running at quarterback, Colorado could surprise some people in the Pac-12 this season.

This should be the year UCLA finally starts competing under Chip Kelly with this being his third year, and UCLA has a lot of promising pieces on both sides of the ball. However, Colorado has a chance to be a really good defensive team in the Pac-12 this season and the offense has potential as well as long as Noyer doesn't completely bomb in his new starting role. The Colorado Buffaloes are a sleeper team in the Pac-12 that could surprise some people and I don't think they're getting much respect in this spot from oddsmakers.

Give me Colorado and the points, a game it could win outright.