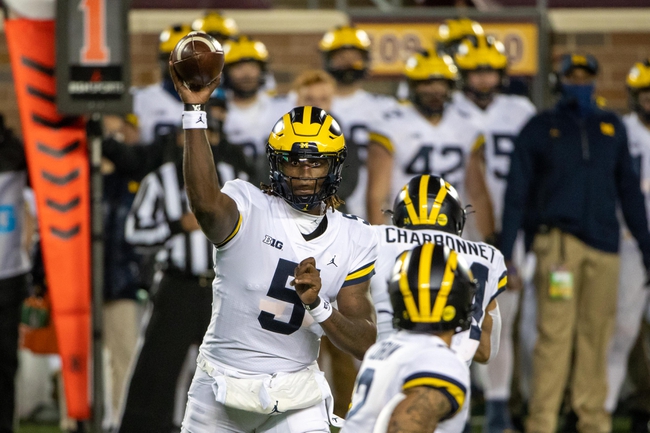 The Michigan Wolverines and the Indiana Hoosiers meet Saturday in Week 10 Big Ten Conference college football action from the Rock.

Michigan is 1-1 on the young college football season. The Wolverines beat Minnesota in their opener, but fell to Michigan State last Saturday. As for the Hoosiers, they’re 2-0 so far. Indiana has a couple of nice wins over Penn State (OT) and Rutgers. Check back all season long for free college football picks at Sports Chat Place.

Michigan’s first outing of the 2020 season went well, as the Wolverines secured a 49-24 blowout win over Minnesota. Michigan quarterback Joe Milton posted 225 yards and a touchdown in that one, and Hassan Hawkins led the rush on six carries for 82 yards and two touchdowns. Ronnie Bell topped the receivers there with four catches for 74 yards.

In last week’s game versus Michigan State, the Wolverines suffered a difficult loss, falling 27-24 in a game that was tight the whole way. Milton was busy, throwing for 300 yards on 32-of-51 passing. Milton also led the rush with 59 yards on 12 carries, but couldn’t find the end zone. Leading the Wolverines receivers was Roman Wilson on five catches for 71 yards.

Over on the Indiana side, they had a tough matchup versus Penn State in their opener, but prevailed in overtime 36-35. Hoosiers quarterback Michael Penix posted 170 yards with one touchdown and an interception. Stevie Scott was tops in rushing with 20 carries for 57 yards and two scores, while Miles Marshall had 46 yards on four receptions.

In game two against Rutgers, Indiana kept it rolling on a nice 37-21 victory. Penix was hot in that one with 238 yards and three touchdowns, while Scott rushed 21 times for 81 yards. Whop Philyor was the lead receiver in that one with five catches for 137 yards.

PICK: I’m going to stick with Indiana, but probably staying away in reality. The Hoosiers have scored very well over their first two games, with a combined 73 points total. Indiana has allowed a combined 56 on the other side however, and a Michigan team in a bounce-back game could cause some trouble here. Still, I think that Indiana offense can hang tough here and power out a cover. Should be a great game. 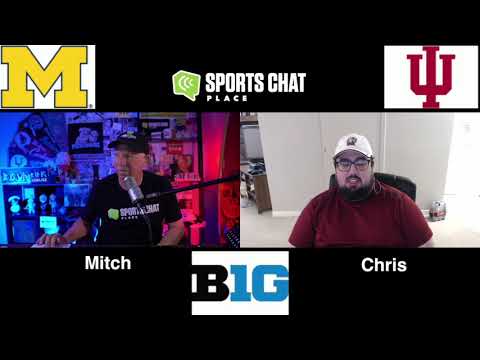