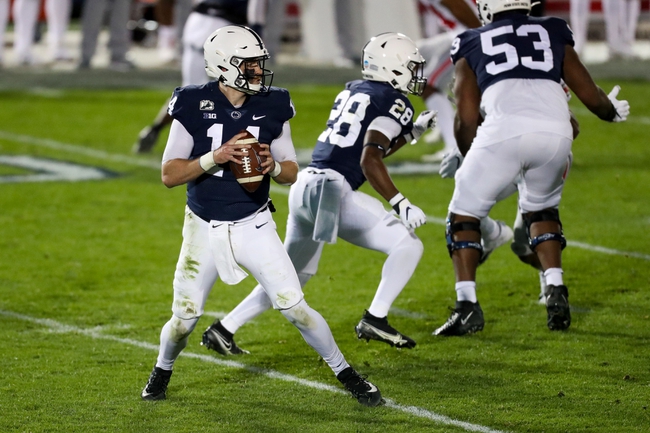 Maryland enters this one at 1-1 so far this year. The Terrapins fell in a blowout to Northwestern in their first game, but eked out an OT win over Minnesota back on Friday. As for Penn State, they’re 0-2 in 2020. The Nittany Lions have fallen in matchups versus Indiana and Ohio State thus far. Check back all season long for free college football picks at Sports Chat Place.

The Terrapins were overmatched against Northwestern in their opening game, and were trailing 30-3 at halftime. Things didn’t get any better the rest of the way, as Maryland fell in a 43-3 blowout. Terrapins quarterback Taulia Tagovailoa went 14-of-25 for 94 yards and three interceptions in that one.

The Minnesota game turned out much better for Maryland, but they had to fight to get it in a tense 45-44 overtime win. Tagovailoa played much better there with 394 yards, three touchdowns and an interception, while Jake Funk rumbled for 221 rush yards and a score. Jeshaun Jones (three catches; 103 yards; TD) and Dontay Demus (seven catches; 101 yards; TD) led the receiving corps there.

Over on the Penn State side, they’ve had a couple of tough matchups coming out of the gate, and it’s resulted in two losses to start the season. The Lions dropped a tough one versus Indiana in overtime 36-35 in the opener, then fell 38-25 to a good Ohio State team last weekend.

In the loss to the Buckeyes, Penn State quarterback Sean Clifford put up 281 yards with three touchdowns and one interception, while Devyn Ford posted 36 yards on eight rushes. Jahan Dotson had a great day receiving however, logging 144 yards and three touchdowns off eight catches.

PICK: I’m going to stick with Penn State here, but it’s fairly close. Maryland looked completely flat in the Northwestern game, and couldn’t do much of anything right. The Terrapins turned it around against Minnesota, but still coughed up a truckload of points on the other side. Penn State is talented enough to take control of this game, and really need a big statement win/cover in this one. I think they’ll get it.