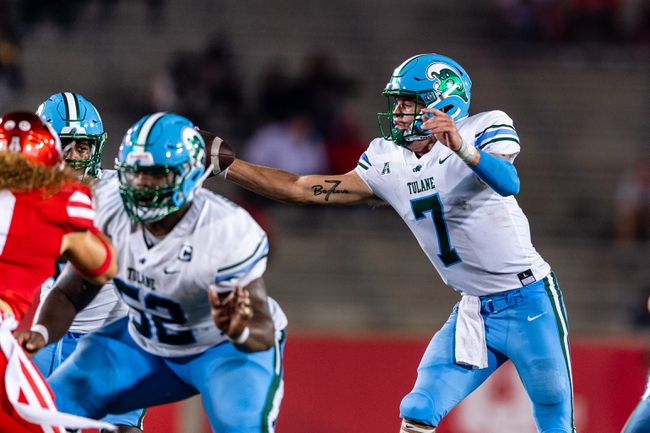 The Tulane Green Wave will try to get back to .500 after picking up a 38-3 win over Temple in their last game. Michael Pratt has thrown for 895 yards, 9 touchdowns and 3 interceptions on 49.2% passing while Keon Howard’s thrown for 314 yards, a touchdown and an interception on 43.1% passing. Stephon Huderson leads the Green Wave with 432 rushing yards and 3 touchdowns while Cameron Carroll has 404 rushing yards with a team-high 8 touchdowns and Amare Jones has 224 rushing yards. The aforementioned Pratt also has 108 rushing yards and 5 TDs for Tulane this season. Duece Watts leads Tulane in receiving with 15 grabs for 306 yards along with 3 TDs while Jha’Quan Jackson has 13 catches for 204 yards and 4 scores and Phat Watts has 12 catches for 146 yards this season. Defensively, Dorian Williams leads Tulane with 53 total tackles including 33 solo tackles and 2.5 sacks while Nick Anderson has 48 total tackles and Chase Kuerschen has 46 total tackles including a team-high 35 solo tackles. Patrick Johnson leads Tulane with 6 sacks while Cameron Sample has 4 sacks and Jeffery Johnson has 3 sacks and Macon Clark has a pair of interceptions for Tulane’s D this season.

The East Carolina Pirates will be out to rebound from a 1-4 start to the year after a 34-30 loss to Tulsa last time out. Holton Ahlers has thrown for 1,003 yards, 9 touchdowns and 5 interceptions on 63.2% passing while Rahjai Harris has rushed for a team-high 448 yards and 3 touchdowns and Keaton Mitchell has 131 rushing yards this season. Tyler Snead leads East Carolina with 36 grabs for 302 yards and 2 touchdowns while Blake Proehl has 25 catches for 214 yards and C.J. Johnson has 207 receiving yards with 4 touchdowns. Audie Omotosho has 176 receiving yards as well for ECU this season. Defensively, Xavier Smith leads East Carolina with 48 total tackles including 26 solo tackles while Jireh Wilson has 38 total tackles with 26 solo tackles as well as a team-high 3.5 sacks. Warren Saba also has 2 interceptions for the Pirates this season.

Tulane looked good in their last game at home, but I’m partially wanting to chalk that up to Temple being completely inept offensively for that entire game as opposed to giving Tulane credit for one good defensive showing. This is still a Tulane team that’s allowed 31 or more points in three of their five conference games this season. On the other hand, the Pirates don’t know what defense is when they’re playing anyone but USF, and I wouldn’t be surprised if Tulane hung 40 or 50 on them as well. Either way, I’m siding with the over here as I don’t think one team will be able to stop the other from scoring.