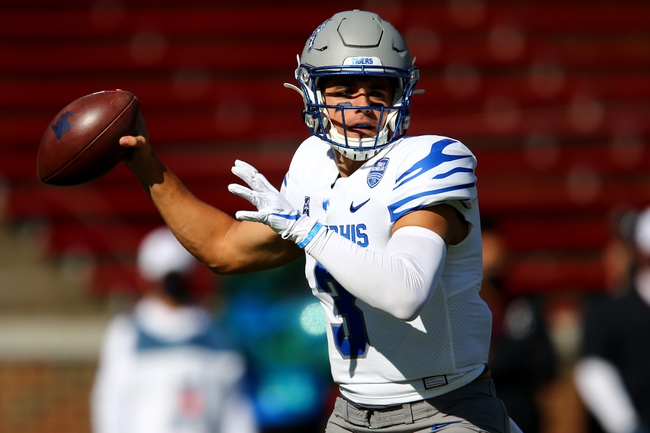 Photo by The Enquirer-USA TODAY Sports

South Florida enters this one at just 1-5 so far. The Bulls opened with a win over the Citadel but have since hit the skids on a five-game losing streak. As for Memphis, they’re 3-2 so far. The Tigers had consecutive wins under their belt, but lost big to Cincinnati over the weekend. Check back all season long for free college football picks at Sports Chat Place.

South Florida began with a promising win over the Citadel 27-6, and they’ve only been in one close game since. The Bulls have lost 52-0 to Notre Dame, 28-7 to Cincinnati, 44-24 to East Carolina, 39-37 to Temple and 42-13 to Tulsa since that opening win. Hopefully the bye week will help.

In USF’s most recent game versus Tulsa, Bulls quarterback Noah Johnson threw for 150 yards, one TD and one interception. Cade Fortin led the rush on four carries for 39 yards, and Omarion Dollison had 54 yards on six catches in the blowout loss.

Over on the Memphis side, they’ve had some nice performances this year so far, but have lost steam against tougher opponents. The Tigers’ first loss came courtesy of a good SMU team, 30-27 in a tough defeat. The other came last Saturday versus Cincinnati and wasn’t close after halftime: ultimately a 49-10 loss.

In the defeat by the Bearcats, Memphis quarterback Brady White posted 316 yards and a touchdown, while Rodrigues Clark led an anemic rush on 16 yards from 12 carries. Calvin Austin posted seven catches for 121 yards, and Tahj Washington added two grabs for 104 yards and a score.

PICK: I’m going to stick with Memphis here. South Florida has had some pretty nice offensive performances, but in those games they’ve allowed a lot of points on the other side, as with East Carolina (44-24) and Temple (39-37). The Tigers have plenty of offense to set the pace here, and Memphis is more than capable of bouncing back from a bad defeat with a nice cover.