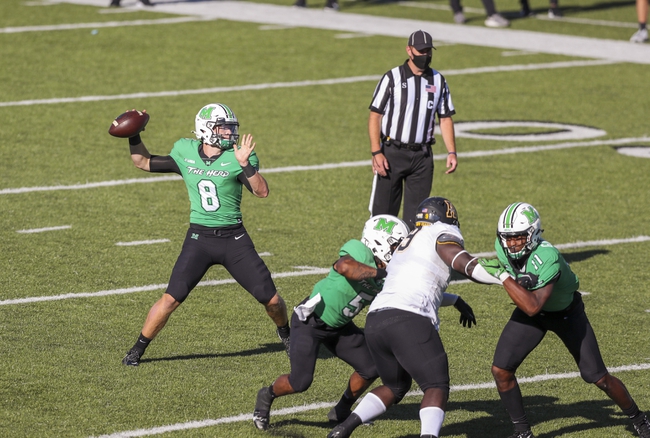 The UMass Minutemen look t bounce back as they meet the Marshall Thundering Herd in college football action from Joan C. Edwards Stadium on Saturday afternoon.

The UMass Minutemen will look for a huge road upset after starting their season with a 41-0 loss to Georgia Southern last time out. In that loss, Mike Fallon threw for 41 yards and an interception on 7 of 12 passing while Josiah Johnson had 39 yards and a pick on 6 of 9 passing. Will Koch led the Minutemen on the ground with 41 rushing yards while Ellis Merriweather had just 21 rushing yards on 16 carries. Samuel Emilus had a team-high 4 catches for 28 yards while no other UMass receiver had more than 2 catches or 16 yards in the loss. Defensively, Cole McCubrey had a team-high 9 tackles including 7 solo tackles while Avien Peah had two tackles for a loss and Gerrell Johnson had a fumble recovery.

This is the problem with UMass games, a lot of times, the Minutemen are so much worse than the other team, that these lines are whacked out, but the problem is that the Minutemen are so bad, the other team has a decent chance of still covering. The issue here is that Marshall is heads and shoulders the better team, it’s simply a matter of whether or not the Herd call off the dogs if they’re up by enough. We’ve seen Marshall put the boots to teams like Western Kentucky and Louisiana Tech on the road, and Louisiana Tech to single a team out, is no slouch either, so I think the Herd can cover this number. I’m not betting it personally, but to pick a side, I’d lay the points with Marshall here. UMass is awful.