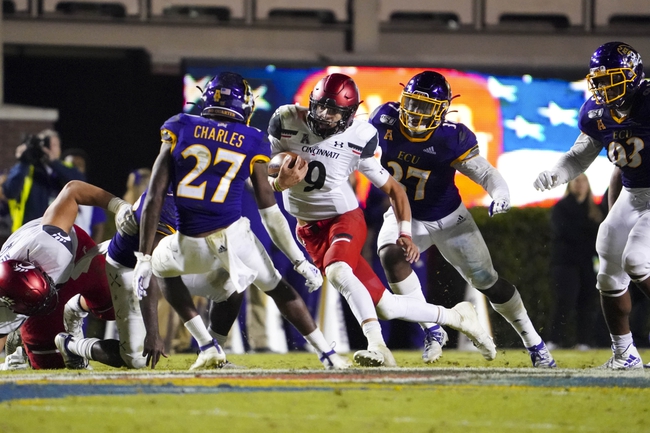 East Carolina enters this one at just 1-5 this year. The Pirates have lost their last three straight versus Navy, Tulsa and Tulane. As for Cincinnati, they’re 6-0 so far. The Bearcats have beaten SMU, Memphis and Houston in their last three games. Check back all season long for free college football picks at Sports Chat Place.

East Carolina’s record looks pretty ugly this year, but they’ve been close in a couple of their losses. The Pirates were blown out by UCF and Georgia State to open the year, then beat USF by 20 on October 10. Since then it’s been a 27-23 loss to Navy, a 34-30 loss to Tulsa and a 38-21 loss to Tulane over this three-game losing streak for ECU.

In the loss to Tulane, East Carolina quarterback Holton Ahlers put up 351 yards with three touchdowns, and Rahjal Harris led a tepid rush on 27 yards from 13 carries. Blake Proehl did most of the work receiving with 182 yards and two scores off 13 catches.

Over on the Bearcats’ side, there’s not a whole lot to complain about. Cincinnati’s 6-0 record is full of blowout wins; the closest result so far this year was a 24-10 win over Army back in September. Otherwise it’s a series of big wins, including a 38-10 blowout over Houston this past weekend.

In the win over the Cougars, Cincinnati quarterback Desmond Ridder put up 162 yards with one touchdown and one interception and rushed for 103 yards with three scores. Gerrid Doaks added 184 rush yards and a TD, while Michael Young snagged four passes for 47 yards.

PICK: I’m going to stick with Cincinnati here, even though the line is bound to be pretty thick everywhere. The Bearcats offense has been great this season, and they’ve scored below 28 points just once (24). Over the last three games Cincinnati has managed a combined 129-33 score against a trio of decent teams. ECU likely won’t be able to keep up here so I’m thinking this one will be another Bearcats blowout.