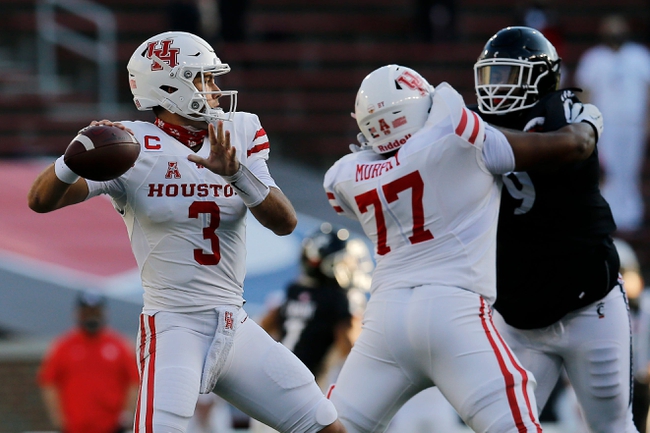 The USF Bulls and the Houston Cougars meet in AAC college football action from TDECU Stadium in Houston on Saturday afternoon as each team looks for a much needed win.

The USF Bulls will be out to snap a six-game losing streak after a 34-33 loss to Memphis in their last game. Jordan McCloud has thrown for 757 yards, 4 touchdowns and 2 interceptions on 62.2% passing while Noah Johnson has 459 yards, 3 touchdowns and an INT on 62.3% passing and Johnny Ford has a team-high 285 rushing yards this season with 3 TDs. Kelley Joiner Jr. has 242 rushing yards while Brian Battle and Noah Johnson each have 100+ rushing yards with Johnson adding 106 rushing yards and 3 scores as well this season. Omarion Dollison leads USF with 220 receiving yards while DeVontres Odoms Dukes has 18 grabs for 214 yards and a pair of touchdowns. Latrell Williams, Mitchell Brookman, Bryce Miller and Johnny Ford all have 100+ receiving yards with Williams adding a team-high 18 grabs of his own this season. Defensively, Antonio Grier Jr. leads USF with 47 total tackles including a team-high 28 solo tackles and 3 sacks. Daquan Evans has a team-high 3 interceptions and Mekhi Lapointe has a pair of INTs as well this season.

The Houston Cougars will look to rebound from back-to-back losses after a 38-10 loss to Cincinnati last time out. Clayton Tune has thrown for 1,397 yards, 8 touchdowns and 5 interceptions on 61.3% passing while Kyle Porter leads the Cougars in rushing with 324 rushing yards and 4 touchdowns this season. Maruez Stevenson leads Houston with 278 receiving yards and 3 touchdowns while Keith Corbin has a team-high 20 catches for 266 yards and Nathaniel Dell has 224 receiving yards with a pair of TDs. Tre’von Bradley has 202 receiving yards as well for Houston this season. Defensively, Grant Stuard leads Houston with 41 total tackles including a team-high 20 solo tackles while Payton turner has a team-high 4 sacks and David Anenih has 3 sacks as well for Houston on the year.

Both of these teams struggle to give up points and Houston has a tradition of being a reliable offense so laying the points would make sense. However, as bad as USF has been this season, the losses to Notre Dame and Cincinnati on the road as blowouts are to be expected, and they’ve lost their last two road games to Memphis and Temple by a combined three points. The Houston offense just hasn’t been as reliable as it has been in years past, and while it’s always iffy to back USF, I simply feel this is a case of too many points with the way that Houston’s stumbled at times this season. Give me USF and the points in this game.