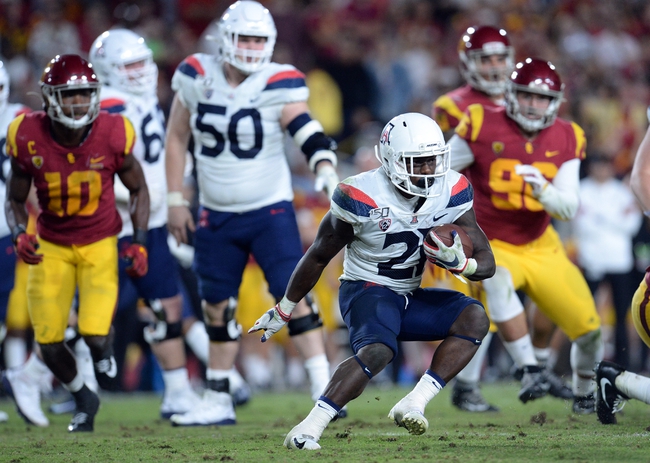 The USC Trojans visit the Arizona Wildcats as they meet Saturday in week 11 Pac-12 college football action at Arizona Stadium.

The USC Trojans beat Arizona State in its season opener and look to start 2-0 for the third time in the last four seasons. The USC Trojans have split their last six road games. Kedon Slovis is completing 72.7 percent of his passes for 381 yards, two touchdowns and one interception. Slovis has two or more touchdown passes in nine straight games. Drake London and Amon-Ra St. Brown have combined for 225 receiving yards and one touchdown while Tyler Vaughns has seven receptions. The USC Trojans ground game is averaging 175 yards per contest, and Vavae Malepeai leads the way with 60 yards on eight carries. Defensively, USC is allowing 27 points and 392 yards per game. Talanoa Hufanga leads the USC Trojans with 10 tackles, Marlon Tuipulotu has one sack and Isaiah Pola-Mao has two pass deflections.

The Arizona Wildcats will make their season debut after their contest against Utah was canceled due to COVID-19 related issues. The Arizona Wildcats have split their last six home games. Grant Gunnell will takeover at quarterback, and he threw for 1,200 yards and nine touchdowns as a backup last season. Arizona has its top receiver returning in Jamarye Joiner, who led the Wildcats with 552 receiving yards and five touchdowns. Gary Brightwell should get more carries at running back after averaging 5.91 yards per carry on 66 touches. Defensively, Anthony Pandy returns after having 66 tackles, Jalen Harris led Arizona with four sacks and Lorenzo Burns had four interceptions. Arizona has some serious potential on both sides of the ball this season, but it’s hard to ignore this club ending last year with seven straight losses. It’s a wait and see approach with Arizona right now.

The USC Trojans should have a little pep in their step after making an impressive comeback to beat Arizona State and coming away with a last minute victory. USC also had a chance to knock the rust off. We have no idea what to expect from Arizona and the Wildcats did lose seven straight to end the year. With that said, there's a lot of talent on this Arizona team and Paul Rhoads at defensive coordinator could create some magic with the playmakers the Wildcats return. This game has the potential to be a lot closer than some expect.

Give me Arizona and the free points at home.