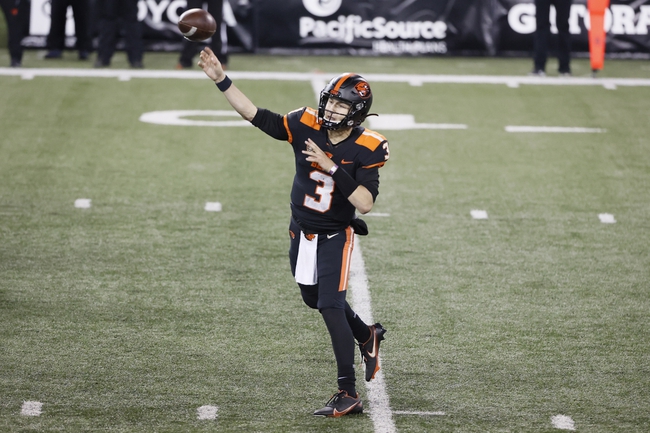 The Oregon State Beavers visit the Washington Huskies as they meet Saturday in Pac-12 college football action from Husky Stadium.

Oregon State enters this one at 0-1 on the year. The Beavers opened up with a 10-point loss to Washington State over the weekend. As for Washington, this will be their first outing of the 2020 college football season. The Huskies posted an 8-5 record last year with a 4-5 mark in the Pac-12 Conference. Check back all season long for free college football picks at Sports Chat Place.

Oregon State is coming off a pretty disappointing year in 2019, finishing at 5-7 overall and out of bowl game contention. The Beavers went 4-5 in the Pac-12, leaving them in fourth place in the North Division. In the 2020 opener versus Washington State, Oregon State fell 38-28.

In the loss to the Cougars, Oregon State quarterback Tristan Gebbia managed 329 yards and a touchdown on 34-of-48 passing, and Jermar Jefferson managed 120 yards and three touchdowns on 21 carries. Trevon Barvord added seven catches for 78 yards and a score to lead the receivers.

Over on the Washington side, they had an overall successful campaign in 2019, but didn’t make much noise in the Pac-12. The Huskies were 8-5 overall and earned a trip to the Las Vegas Bowl where they took out Boise State 38-7. Washington’s 4-5 record in a difficult North Division left the team in third place (and nowhere near Oregon at 8-1 in the conference), however.

Meanwhile, the Huskies are 5-2 ATS in their last seven games on turf and 0-5 ATS versus a team with a losing record. The under is 4-0 in Washington’s last four games overall and 5-1 in their last six games in November.

PICK: I’m going to stick with Oregon State here. It’s going to be a very strange season in the Pac-12 this year, and with a new coaching staff I think Washington will be rusty in their first game. The Beavers did a pretty good job scoring last season, and if they can recapture a little bit of that momentum in head coach Jonathan Smith’s third year I think Oregon State will take a step forward in 2020. The defensive effort needs tightened after giving up 38 points to Washington State, though.