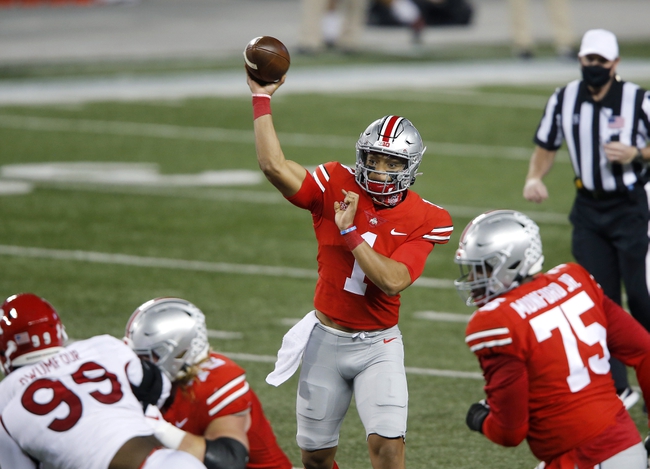 This game has been cancelled and will not be made up.

The Ohio State Buckeyes and the Maryland Terrapins meet in Big Ten conference college football matchup from Capital One Field on Saturday afternoon.

The Ohio State Buckeyes will look to remain unbeaten after improving to 3-0 with a 49-27 win over Rutgers last time out. Justin Field has thrown for 908 yards and 11 touchdowns on 86.7% passing while Master Teague III leads Ohio State rushing with 211 rushing yards and 4 rushing TDs and Trey Sermon has 172 rushing yards this season. Garrett Wilson leads the Buckeyes with 24 catches for 344 yards and a pair of touchdowns while Chris Olave has 18 receptions for 388 yards and a team-high 4 TDs. Defensively, Pete Werner and Tuf Borland each have a team-high 16 total tackles while Marcus Hooker has a team-high 10 solo tackles and Tommy Togiai has a team-high 3 sacks.

The Maryland Terrapins will look to build on back-to-back wins after a 35-19 win over Penn State last time out. Taulia Tagovailoa has thrown for 770 yards, 6 touchdowns and 4 interceptions on 67.4% passing while Jake Funk has a team-high 336 rushing yards. Dontay Demus Jr. leads Maryland with 17 catches for 228 yards and a pair of receiving scores and Rakim Jarrett has 12 grabs for 213 yards and a pair of TDs as well. Jeshaun Jones has 152 receiving yards as well for the Terps this season. On defense, Chance Campbell leads Maryland with 33 total tackles including 18 solo tackles while Mosiah Nasili-Kite and Ruben Hyppolite II each have a pair of sacks this season.

Man it’s tempting to see 25 points on the table with Maryland as home dogs, and while the Terps covered those lines of +17.5 against Minnesota and +27.5 against Penn State with outright wins, going against Ohio State is just a completely different animal. Justin Fields is just not missing his receivers this season and while Ohio State took their foot off of the gas against Rutgers, I don’t think that’s going to happen against Maryland knowing how the Terrapins have a flair for the dramatic and the underdog role. I think this is a game where we see Taulia Tagovailoa’s inexperience show as he just has issues with this Buckeye defense and I expect the offense to do its part as well. I’m envisioning a 49-10 win for Ohio State here, so I’ll lay the points with the Buckeyes on the road here.