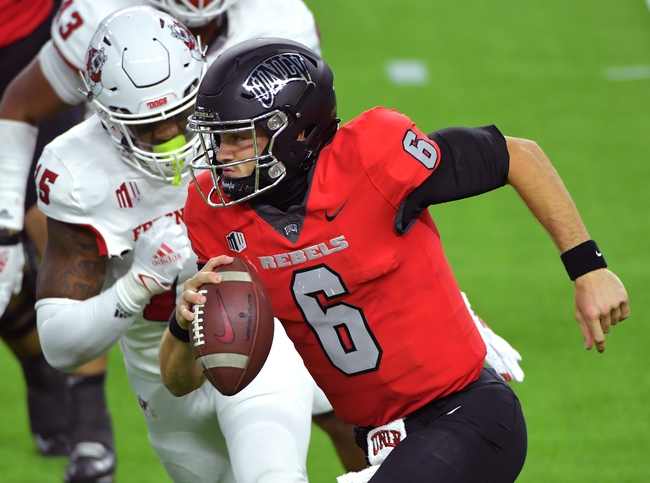 The UNLV Rebels will be on the hunt for their first win of the year after falling to 0-3 with a 40-27 loss to Fresno State last time out. Max Gilliam has thrown for 472 yards, 4 touchdowns and 2 interceptions on 59.8% passing while Charles Williams leads the Rebels in rushing with 268 rushing yards this season. Tyleek Collins leads UNLV with 112 receiving yards and a pair of touchdowns while Kyle Williams has a team-high 12 catches for 101 yards this season. Defensively, Tre Caine leads UNLV with 23 total tackles including 13 solo tackles while Jacoby Windmon has a team-high 3.5 sacks and 21 total tackles with 12 solo tackles. Adam Plant Jr. also has 2.5 sacks this season.

The San Jose State Spartans will look to remain undefeated after a surprising 28-17 win over San Diego State as 10-point underdogs to improve to 3-0 on the year. Nick Starkel has thrown for 706 yards, 7 touchdowns and an interception on 73.4% passing while Nick Nash has 183 passing yards, 2 touchdowns and a pick on 63% passing. Nash leads SJSU in rushing with 83 rushing yards while Bailey Gaither has a team-high338 receiving yards on 21 catches with 2 TDs. Tre Walker has 18 grabs for 215 yards and a pair of scores while Derrick Deese Jr. has 114 receiving yards as well this season. On defense, Kyle Harmon leads San Jose State with 42 total tackles including 23 solo tackles while Tre Jenkins has a pair of interceptions and Cade Hall has a team-high 2.5 sacks this season. Villami Fehoko also has a pair of sacks for the Spartans this year.

Usually San Jose State’s not a team I associate with a double-digit spread of this size and it’s a letdown spot after playing San Diego State tough and winning outright. However, the Spartans just look like a different team with Nick Starkel at QB and it’s starting to remind me of the Spartan team that won 10 games a few years ago. The Rebels just appear lost right now and just can’t seem to do anything right and I think their struggles continue here. I’ll lay the points with San Jose State in this one.