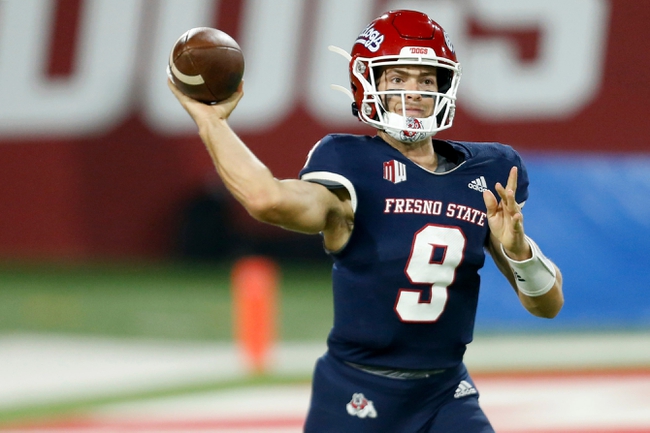 Fresno State enters this one at 2-1 this year. The Bulldogs lost to Hawaii in the opener then beat Colorado State and UNLV in their next two games. As for Utah State, they’re 0-3 so far. The Aggies have fallen to Boise State, San Diego State and Nevada in succession this year. Check back all season long for free college football picks at Sports Chat Place.

Fresno State came out of the gate a little shaky this year with a 34-19 loss to Hawaii, but since then they’ve righted the ship. The Bulldogs have managed a pair of pretty convincing victories since then: 38-17 over Colorado State and 40-27 over UNLV.
In the win over the Rebels, Fresno State quarterback Jake Haener had 164 yards with a touchdown, and Ronnie Rivers added 19 carries for 133 yards and three scores. Rivers was also the top receiver there with six catches for 99 yards and a TD.

Over on the Utah State side, there hasn’t been much to get excited about this season. The Aggies have lost three straight to Boise State (42-13), San Diego State (38-7) and Nevada (34-9) to open up the season and really just haven’t been competitive at all so far.

In the loss to the Wolf Pack, Utah State quarterback Jason Shelley had 96 yards with a touchdown, and also led the rush on seven carries for 34 yards. Deven Thompkins was the leading receiver in the loss, catching six balls for 30 yards.

PICK: I’m going to stick with Fresno State here, mostly because I haven’t seen much of anything from Utah State that would cause me to trust them yet. The Aggies have scored just 29 combined points over three games, and they’ve allowed a combined 114 points across that same span. Fresno State can be a pretty good offensive team when they’re rolling, so I like the Bulldogs to power out a cover in this game.