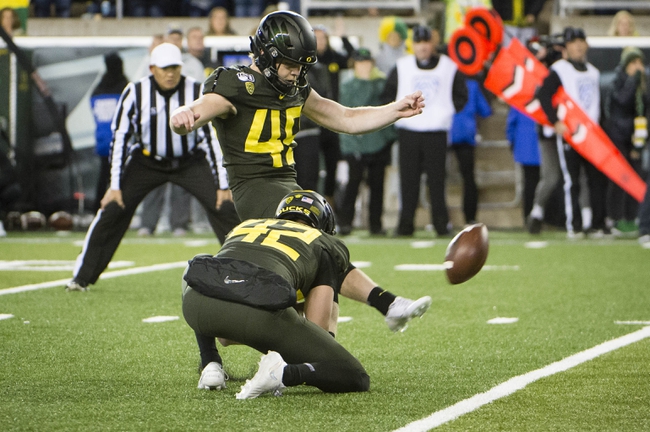 Oregon enters this one at 1-0 this season. The Ducks opened up the year with a 21-point win over Stanford this past weekend. As for Washington State, they’re sitting at 1-0 as well. The Cougars managed a nice 10-point opener win over Oregon State in game one. Check back all season long for free college football picks at Sports Chat Place.

Oregon is coming off a successful campaign in 2019, finishing 12-2 overall and 8-1 in the Pac-12. That result earned the Ducks a North Division Championship and a spot in the conference championship game, where they took out Utah 37-15. Oregon finished off the season with a thrilling 28-27 Rose Bowl win over Wisconsin.

In the first action of the 2020 season, Oregon took out Stanford 35-14. Ducks quarterback Tyler Shough posted 227 yards with a touchdown and an interception (with 85 rush yards and a score as well), and Johnny Johnson had 60 yards on four catches. CJ Verdell added 105 yards  and a score on 20 carries to lead the rush.

Over on the Washington State side, their 2019 campaign didn’t go so well. The Cougars finished at 6-7 overall and 3-6 in the Pac-12, leaving them one spot out of the basement in the North Division. Washington State still got a trip to the Cheez-It Bowl, where they lost to Air Force 31-21.

In the 2020 opener, the Cougars managed a 38-28 win over Oregon State. Washington State quarterback Jayden de Laura managed 227 yards with two touchdowns and an interception. Deon McIntosh posted 147 rush yards and a TD on 18 carries, and Travell harris had seven catches for 107 yards and two touchdowns.

PICK: I’m going with Oregon. This should be a pretty fun game, as both teams had positive results in their first outings of the 2020 season. Oregon didn’t really heat up until the second half against Stanford, where they outscored the Cardinal 21-7 over the final two quarters. Washington State displayed a balanced and consistent offensive attack as well, so they should be able to take a step forward this year if all goes well. I think the Ducks eke out a cover though.