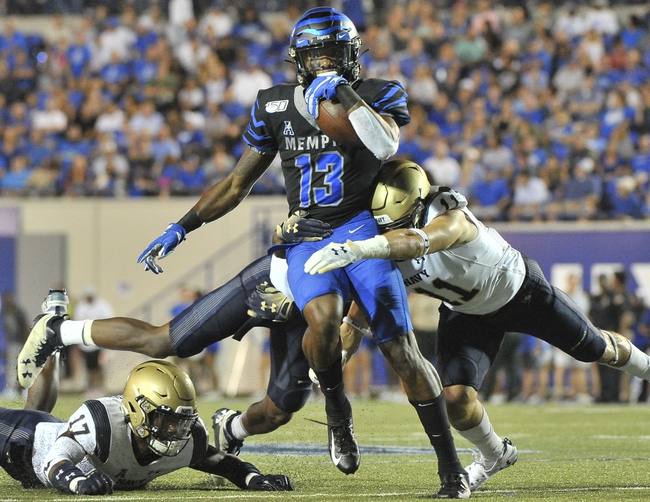 THis game has been postponed.

The Memphis Tigers look to build on their 4-2 record by getting their first road win of the season. The Memphis Tigers have split their last six road games. Brady White is completing 62 percent of his passes for 2,128 yards, 22 touchdowns and five interceptions. White has nine touchdown passes in his last three games. Calvin Austin III and Sean Dykes have combined for 1,082 receiving yards on 13 receptions while Tahj Washington has 21 receptions. The Memphis Tigers ground game is averaging 153.8 yards per contest, and Rodrigues Clark leads the way with 476 yards and one touchdown. Defensively, Memphis is allowing 35.7 points and 519 yards per game. Quindell Johnson leads the Memphis Tigers with 46 tackles, Wardalis Ducksworth has four sacks and Jacobi Francis has two interceptions.

The Navy Midshipmen haven’t played in a couple weeks and need to a win after back-to-back losses. The Navy Midshipmen have won seven of their last nine home games. Dalen Morris is completing 53.4 percent of his passes for 555 yards, three touchdowns and two interceptions. Morris and Tyger Goslin have combined for six touchdown passes this season. Mychal Cooper and Ryan Mitchell have combined for 355 receiving yards and three touchdowns while Myles Fells has three receptions. The Navy Midshipmen ground game is averaging 187 yards per contest, and Nelson Smith leads the way with 447 yards and seven touchdowns. Defensively, Navy is allowing 37 points and 445.3 yards per game. Diego Fagot leads the Navy Midshipmen with 53 tackles, J'arius Warren has one sack and Evan Fochtman has one interception.

The Memphis Tigers are one of the most explosive offensive teams in college football and White could easily be in the Heisman conversation if he played on a more popular school. The issue here is that Memphis plays in a lot of games that come down to the wire and the Tigers are just 1-5 against the spread. The Navy Midshipmen have had an extra week to prepare for this game, and while they're not as efficient as they've been in past years, they're still a tough team to prepare for and that running attack is still effective. Navy has also been one of the better covering teams in college football the last couple of years.

Give me Navy and the points.