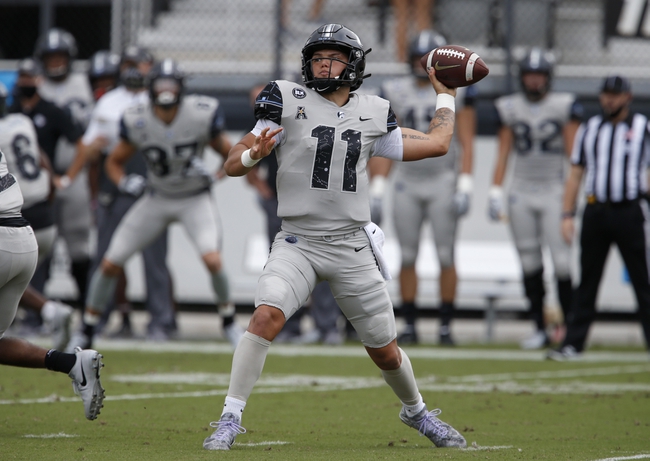 Temple enters this one at just 1-4 so far. The Owls have lost their last three straight ames versus Memphis, Tulane and SMU. As for UCF, they’re 4-2 on the season so far. The Knights have won consecutive games versus Tulane and Houston in their last pair of outings. Check back all season long for free college football picks at Sports Chat Place.

Temple has shown a few flashes of potential this season, but haven’t been able to put it all together—especially on defense. The Owls have scores 23 or more points in four of five games, but they’ve also allowed 31 or more in every game as well. That includes a 47-23 loss to SMU over weekend.
In the loss to the Mustangs, Temple quarterback Re-al Mitchell posted 82 yards and a TD on 9-of-18 passing, and also led the rush with 66 yards on 17 carries. Randle Jones was the leading Owls receiver there with two catches for 86 yards and a TD.

Over on the UCF side, they’ve had some great results so far outside of a couple of misstep losses. The Knights fell to Tulsa 34-26, then fell to Memphis 50-49 in a pair of difficult games. The good news is that UCF bounced back with wins over Tulane 51-34 and Houston 44-21 after that.

In the win over the Cougars, UCF quarterback Dillon Gabriel put up 328 yards with two touchdowns, and Jaylon Robinson had 107 yards on five catches. Otis Anderson and Greg McCrae combined for 277 yards and two scores on 32 carries as well.

PICK: I’m going UCF here. Temple has been (mostly) consistent at scoring points this season, but they haven’t been able to properly pull away from any team yet this year due to some defensive lapses. The Knights have been in every game and are putting up points at a great clip; save for a handful of plays UCF could be undefeated right now. In any case, I like the Knights to have a relatively smooth cover outing in this one.